In this example, we will show how to utilize the Markov Chain to calculate the life expectancy of a cohort.

Say, a cohort of 10,000 people has a probability of death from year 0 years to 100 years as shown in the following table. 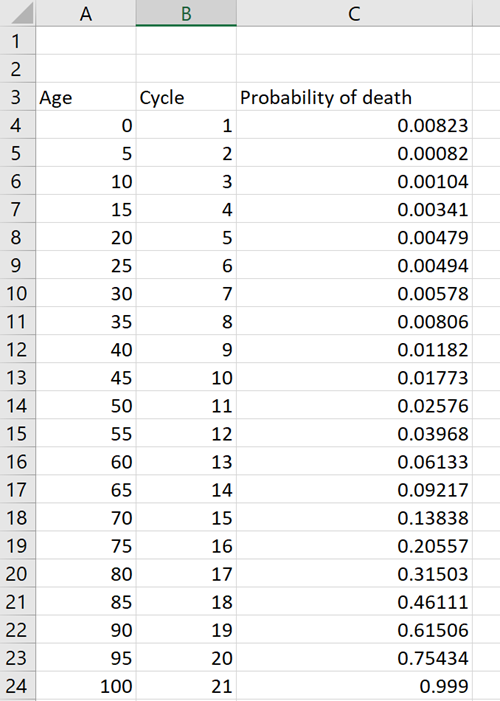 Let's start with the Rational Will or Decision Tree Software, and choose "Markov Chance Node" from this start screen. Please note that I am showing how Markov modeling works in its most basic form.

Please note that we are choosing a Markov node as the root node of the Decision Tree because, in this example, we will focus on the Markov Chain only, and not any other decision analysis. But, once the model is created, you can add other decision nodes later for performing more analysis. Anyway, you will see your diagram starts like this. 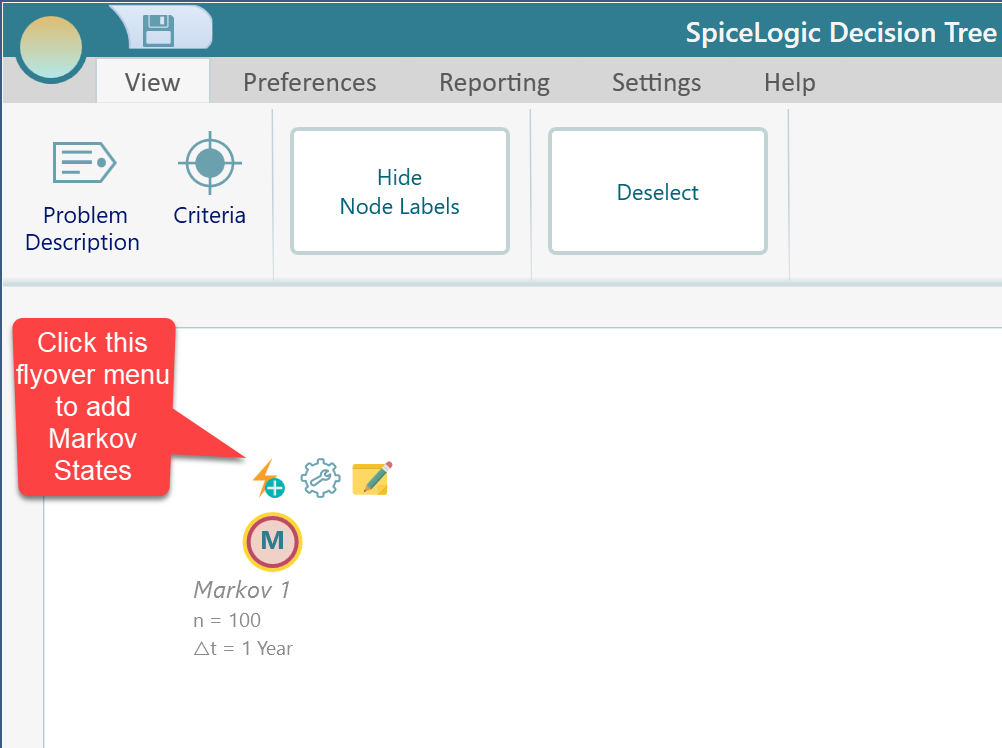 Click that fly-over menu button two times to create two Markov states. You will see the decision tree software will create the diagram like this. Then select a state and mouse double click to enter the node into edit text mode. Then change the text. 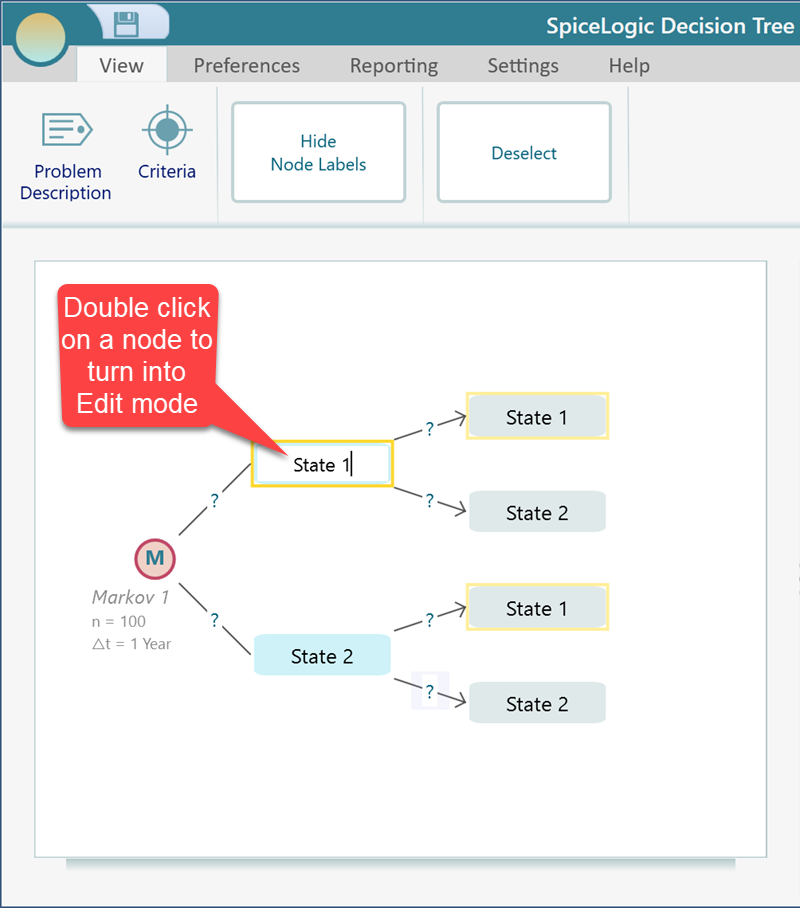 Then. edit the first State as "Well" and edit the second state as "Dead", as shown below.

Once you open the Markov Setting, set up as shown below. Cohort Size 10,000. The maximum number of state transitions is 21, Markov state transition duration is 5 years, and apply the half-cycle correction. Also check the box "Cycle Name" and use the name "Age" as we want to display the Time axis on the charts as Age. 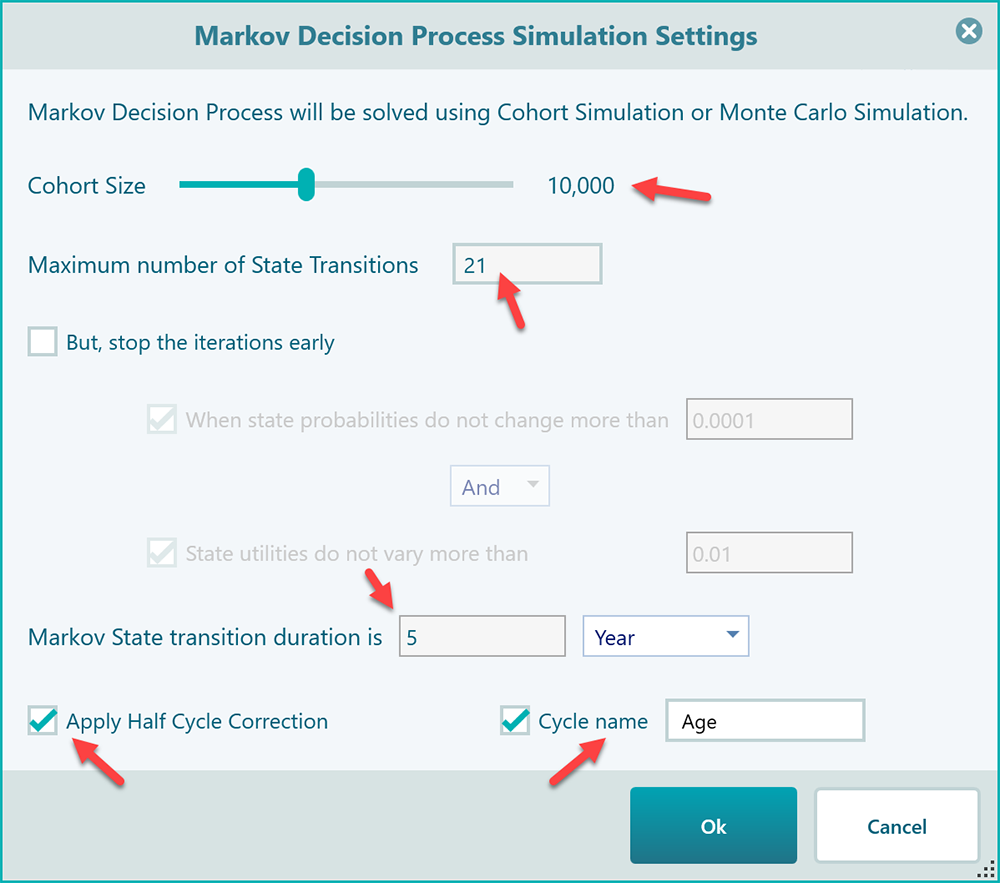 Now, select the node "Well" and right-mouse click to bring the context menu. You will see an option "Set as Initial State". Choose that option to set the Well state as the initial state. 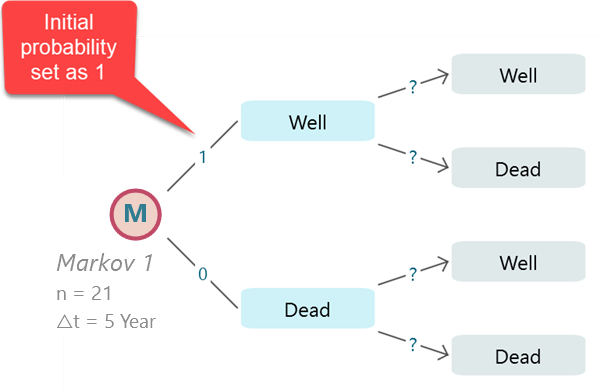 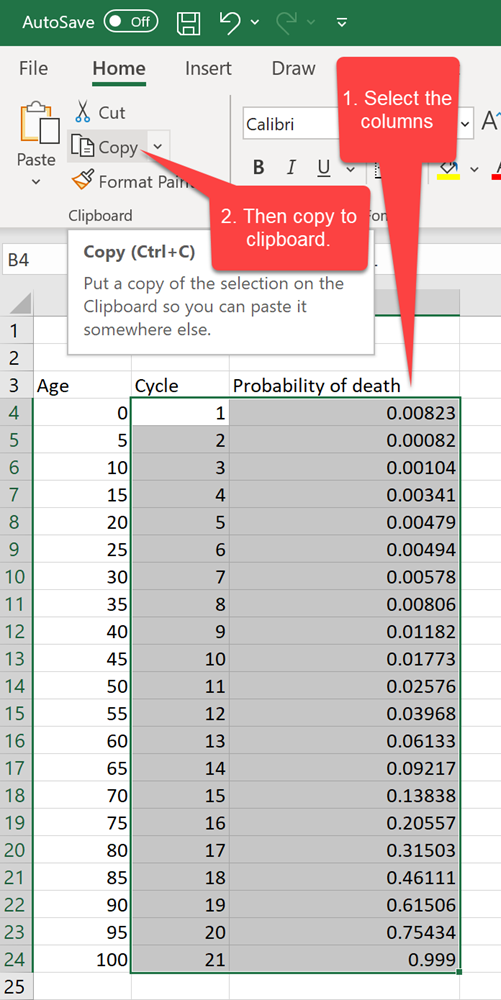 Now, get back to the Decision Tree software and click this button to import the table from your clipboard. Please make sure that your data format is correct as shown in the above screenshot.

Once you click that import button, you will see the data is imported as shown below. 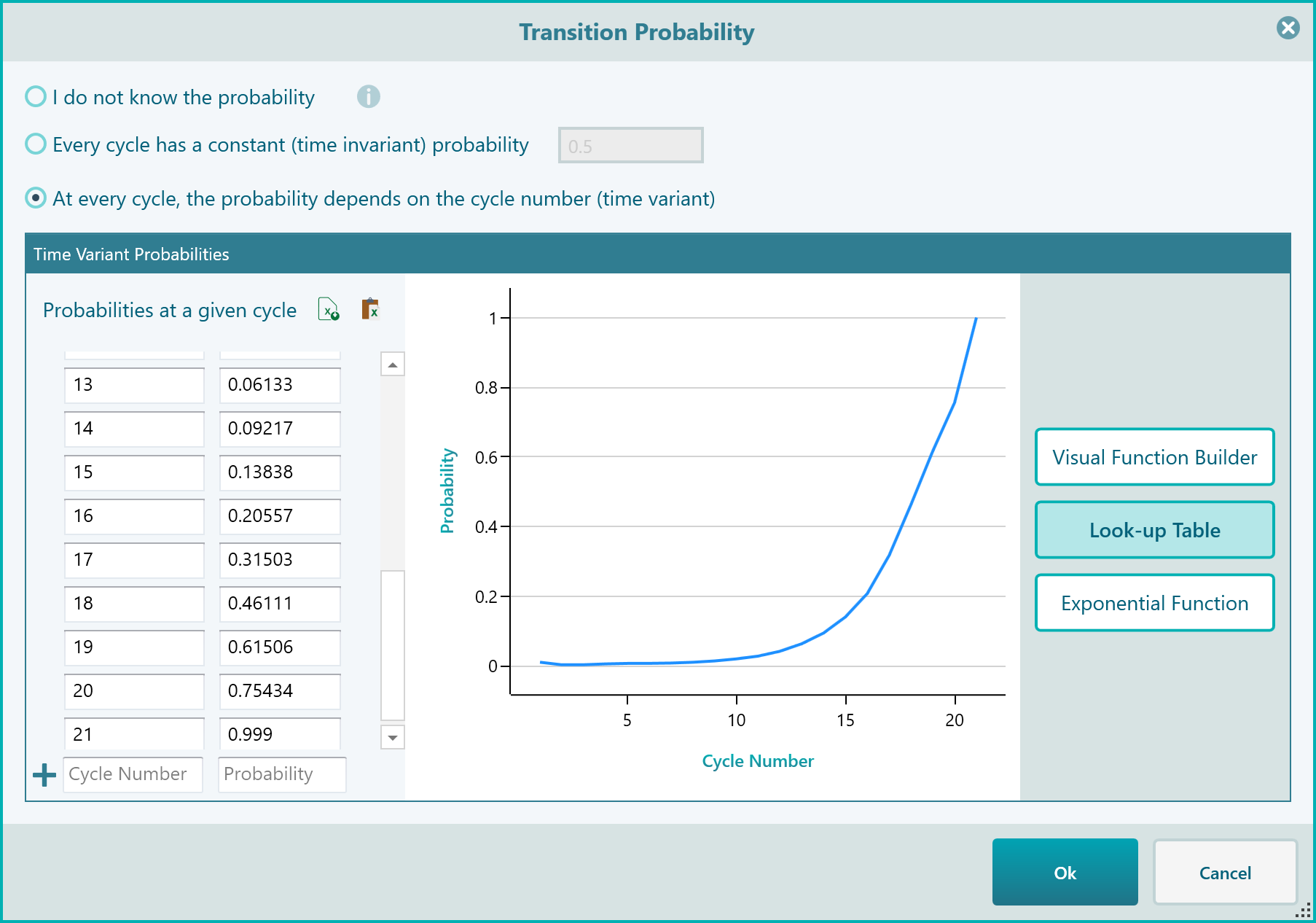 Now, you can set the transition probability of Dead to Well = 0 and Dead to Dead = 1. "Dead" state is called Absorbing state. That means, once someone enters this state, he or she always stays in that state. There is a quick way to set a state as an absorbing state. Just select the state "Dead" and right-mouse click to bring the context menu. You will see an option "Set as absorbing state". Click that option. 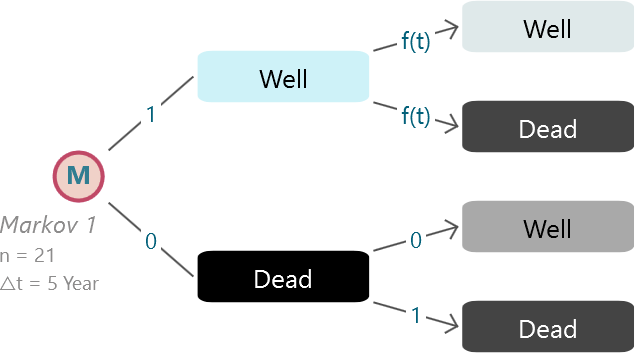 We want to calculate the Life Expectancy, so, let's give the "Well" state credit for the year lived in that state. As our cycle duration is 5 years, so, let's set the payoff as 5-year for Well State. For Dead state, we do not need to give any credit, so we do not need to set a payoff for the "Dead" state.

Then, the cost-effectiveness setup window will appear. 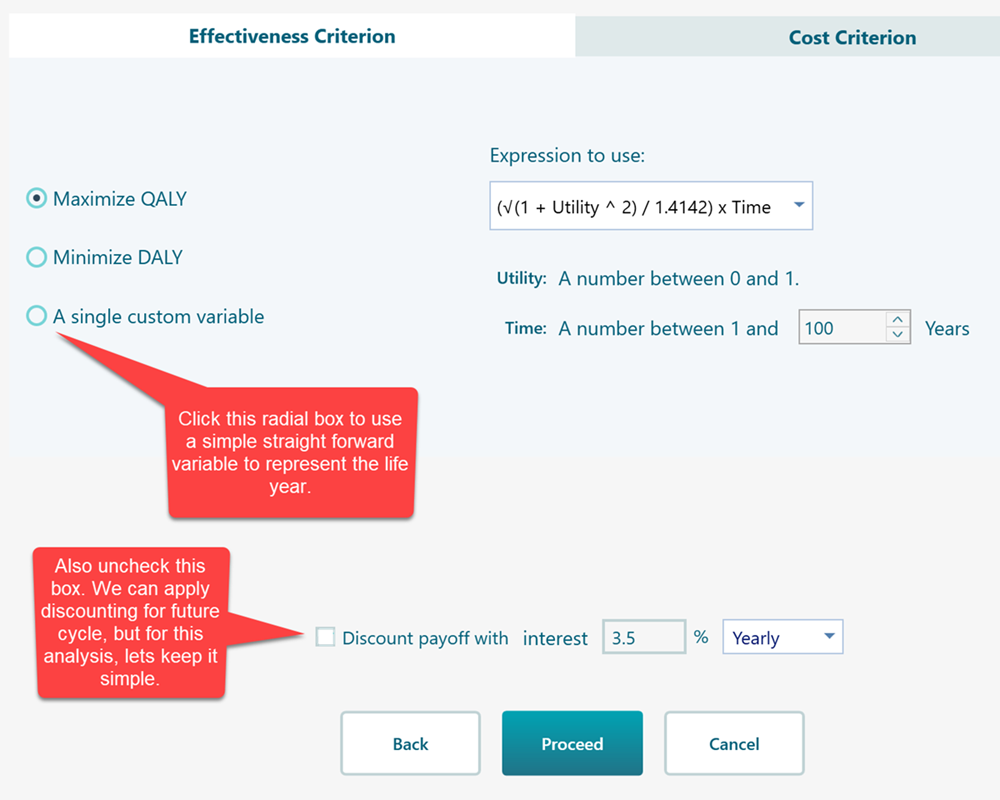 Once you check that radial box for a custom variable, you can define your variable as shown below.

For this analysis, we do not need to configure Cost. So, just click Proceed after that. Then, you will be taken to the payoff editor in the decision tree. Set the Life year "5" for the state "Well".

In the diagram, notice that the expected value is displayed over the node. We can see the expected life year is shown as 76.87. So, 76.87 is the life expectancy of this cohort. 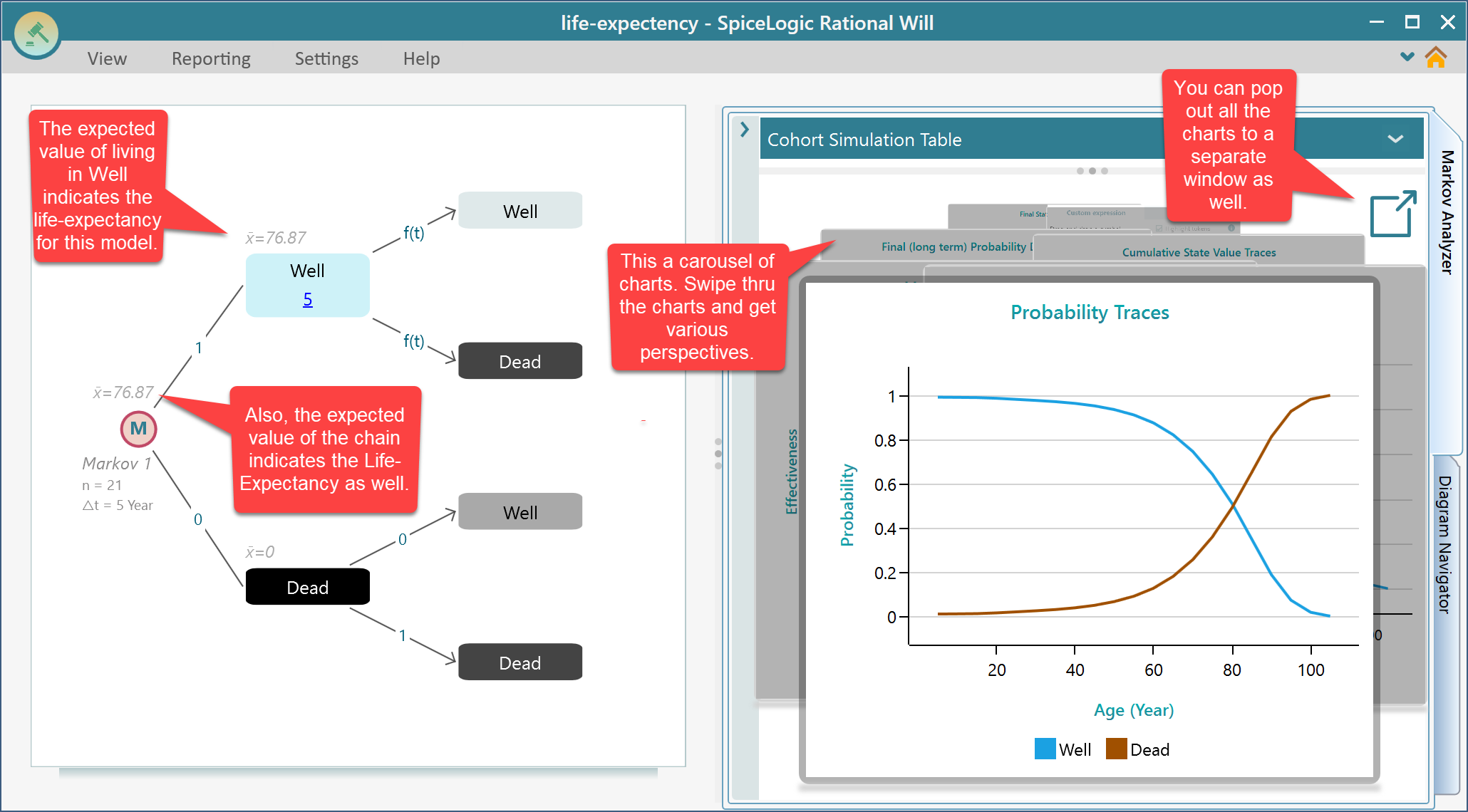 Once you click on the pop-out button, you will see the charts shown as a grid.

But, you can get the organized Cohort simulation traces from this panel.

Last updated on Feb 19, 2022
Introduction to the Markov Models
Index Page
QALY and Cost with Markov Model
This website uses cookies to ensure you get the best experience on our website.