Not everyone has the same attitude towards risk. Someone has more money, and some have less. The person with more money may have a different attitude towards risk, than another person who has less money or who cannot afford a risk. That's why it is crucial to identify the right criterion that suits your situation.

"Maximize Expected Utility Criterion" is a decision-making criterion that selects the optimum action that has the highest expected utility value among all actions.

By default, the Decision Tree software uses Maximize Expected Utility criterion. You can select the criterion from the Ribbon as shown in the following screenshot.

Indecision theory, the von Neumann-Morgenstern utility theorem shows that, under certain axioms of rational behavior, a decision-maker faced with risky (probabilistic) outcomes of different choices will behave as if he or she is maximizing the expected value of his utility function. This theorem is the basis for the expected utility theory.

For the Number type criterion, you can define a utility function. If you don't, the Decision Tree software will create a straight line Risk Neutral Utility function for you behind the scene, which is eventually equivalent to the Expected Value.

The Expected utility values are always displayed in the Options Analyzer panel's chart carousel, as shown below.

This criterion is appropriate for Pessimist persons. Using this criterion, the decision-maker looks at the worst that can happen under each action and then choose the action that has the largest payoff for the worst-case scenario. The Decision-maker may believe in Murphy's law as "Anything that can go wrong will go wrong". 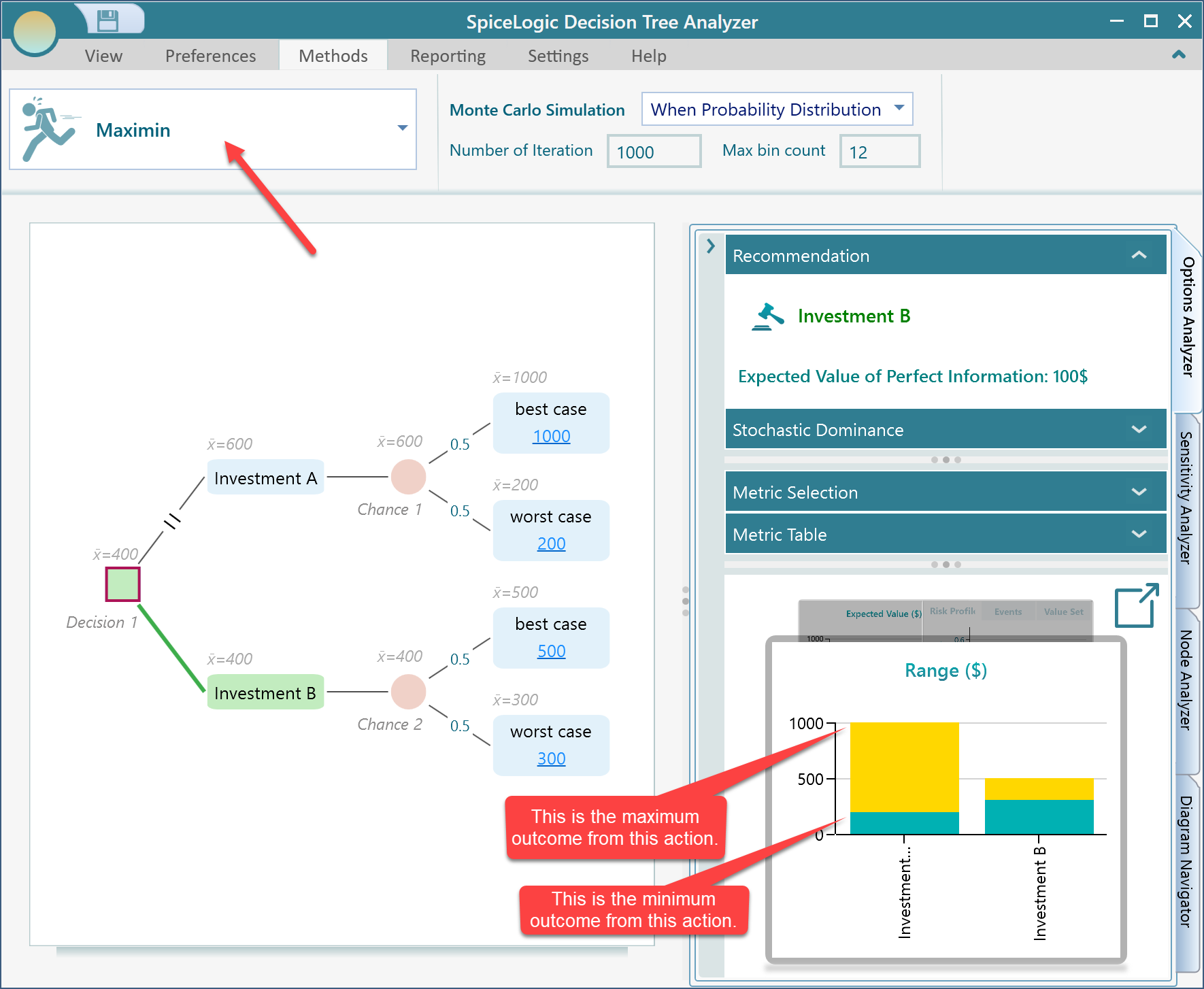 Not everyone tries to avoid risk; rather, some people love to take a risk for a higher payoff. Think about gambling. If you gamble in a Casino and if you are not worried about losing money, then most probably you will play that game which can give you a higher amount of money for the best case. This is precisely the maximax payoff criterion. For two investments, according to the maximax payoff criterion, the decision-maker will choose the investment that has a higher payoff for the best-case scenario. If you want to use such a criterion, you can select that from the Ribbon the same as the other criterion.

Practically, this criterion may be suitable for rare cases.

Maximum regret is the metric that indicates, if you choose an option, at maximum how much you can regret by not selecting other options. It is also known as opportunity cost. Let's consider the same decision tree again. 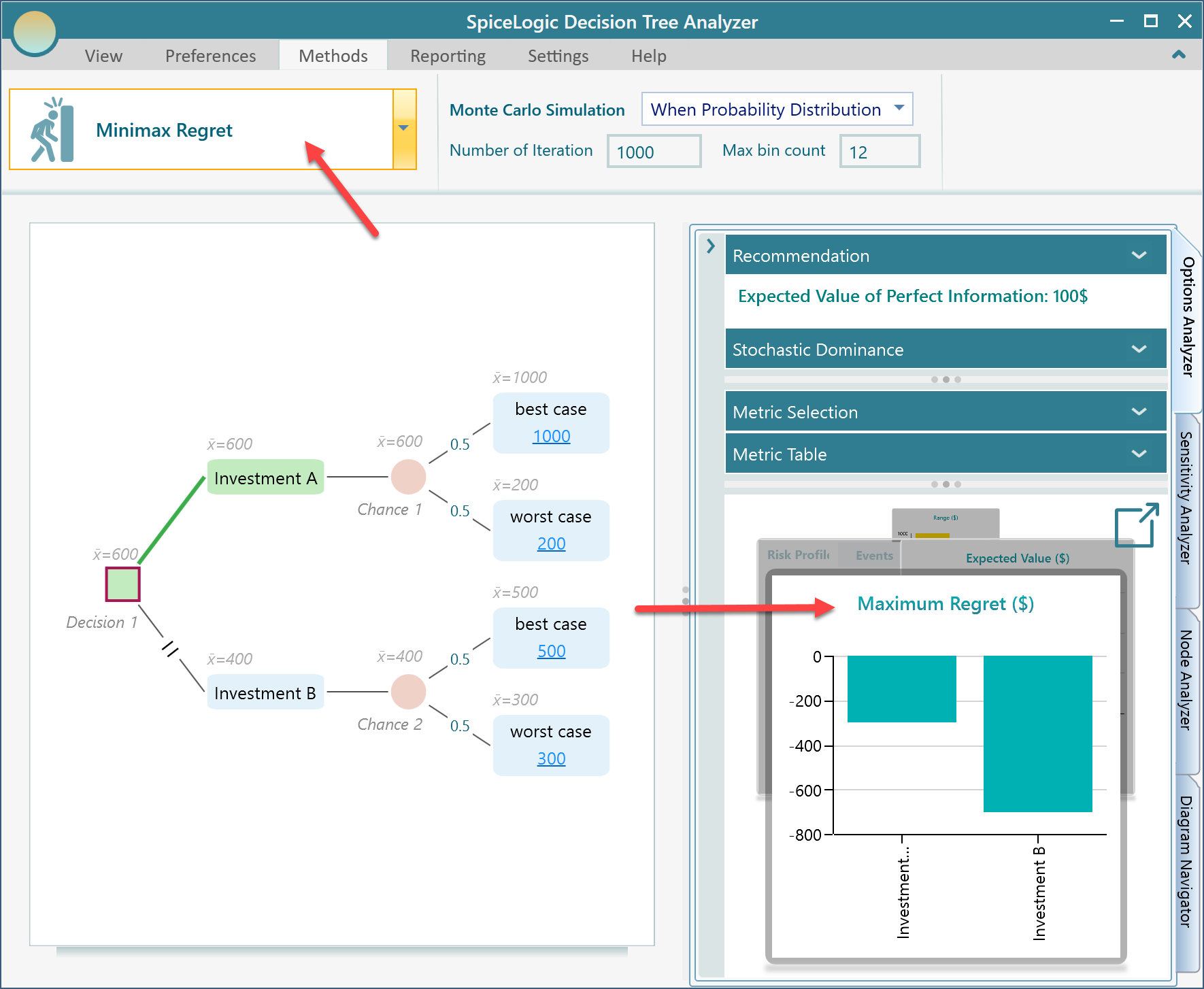 Maximum Regret is displayed with a minus sign, because, it indicates the difference between the worst payoff in the action and the maximum possible payoff from the other action.

If you do not see the Maximum Regret chart appearing in the carousel, just expand the Metric selection panel and make sure that the checkbox for the maximum regret is checked. 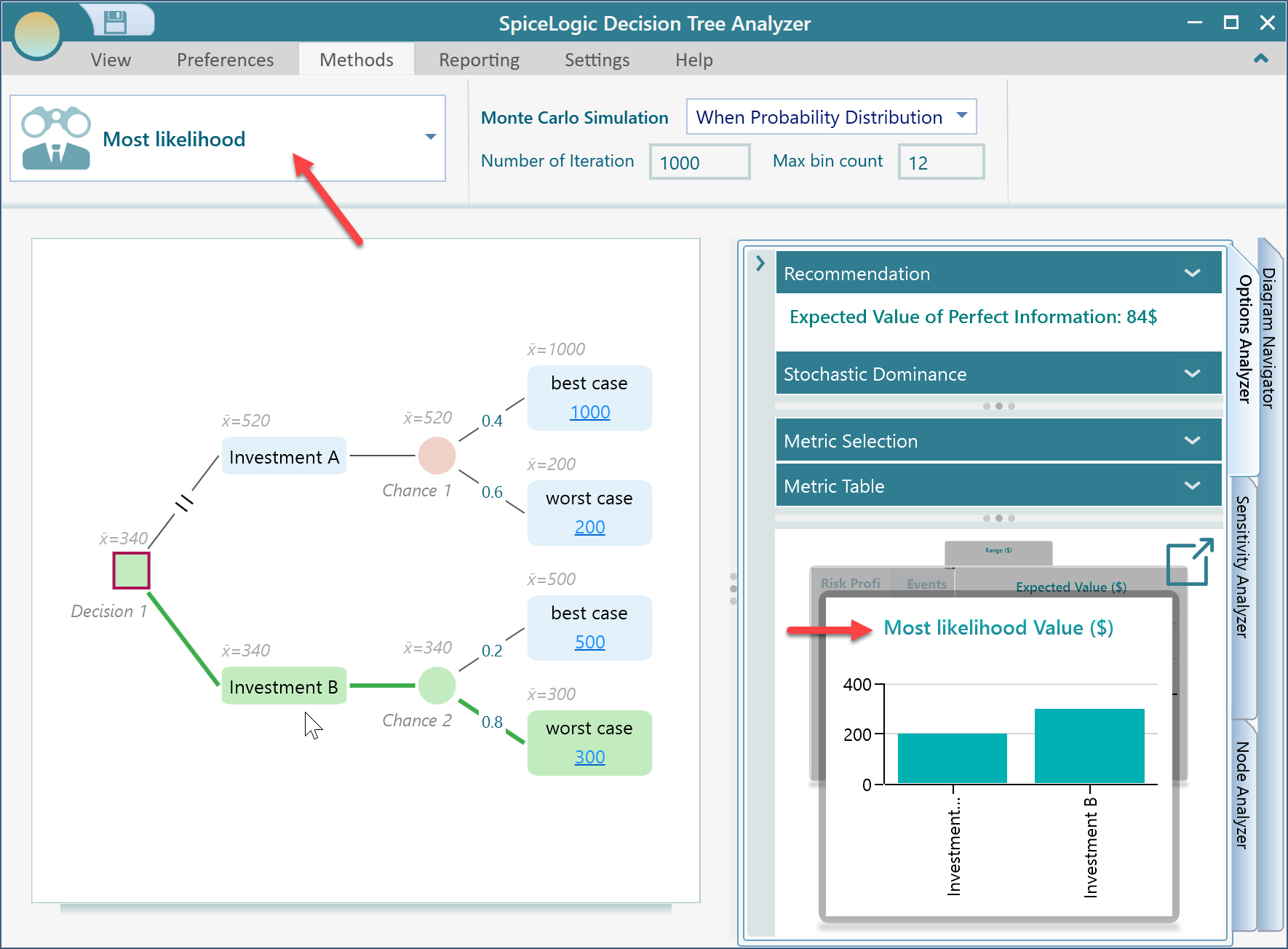 The world would be too boring if every decision was made to avoid risks. Without being an optimist, no book could be written, no creative work could have been done. A writer takes the risk of not making up the cost of writing a book; still, he/she writes a book, and many of them can make a fortune out of selling a million copies, and many of them lose all the money he/she invested in the book production. But every writer takes the risk by thinking optimistically. That's why we see lots of good books in the world. The same thing happens to a movie, art, music, and a lot of things. Entrepreneurs are optimistic; they take risks and change the world.

So, does it mean that we should be delusional and extremely optimistic about our beliefs and take any risk thinking that we will always win? No. If not, then should we always keep our money in the saving account, without investing in any business, in the fear that we will always lose? Well, that depends.

Then, can we be optimistic emotional, and at the same time rational?

Yes, there can be a balance between optimism and pessimism. That is the idea of the Hurwicz Optimism Pessimism rule.

You can predefine a degree of optimism in percentage. Let's call it a "Degree of Optimism". And then when you are presented with an investment opportunity with possible risks, you will judge the opportunity by taking a percentage of the best-case payoff and a percentage of the worst-case payoff. That percentage will be defined by that degree of optimism. Then, you can evaluate a set of investment opportunities. You can select the one that gives the highest number based on such evaluation. This criterion is called the Optimism-Pessimism rule.

Suggested by Leonid Hurwicz in 1951, this criterion attempts to find a middle ground between the extremes posed by the optimist and pessimist criteria. Instead of assuming total optimism or pessimism, Hurwicz incorporates a measure of both by assigning a certain percentage weight to optimism and the rest to pessimism. It suggests that the minimum and maximum of each strategy should be averaged using α and 1 - α as weights, where α is the degree of optimism. If α is set to 0, the criterion becomes the Maximin, and if α is set to 1, the criterion becomes Maximax.

Therefore, Investment B should be considered the winner. You can select the Hurwicz Optimism Pessimism rule from the Decision Tree software and then you can set the degree of optimism in the Hurwicz parameters tab as shown below.

If you change the degree of optimism to 20%, then the result changes as shown below: 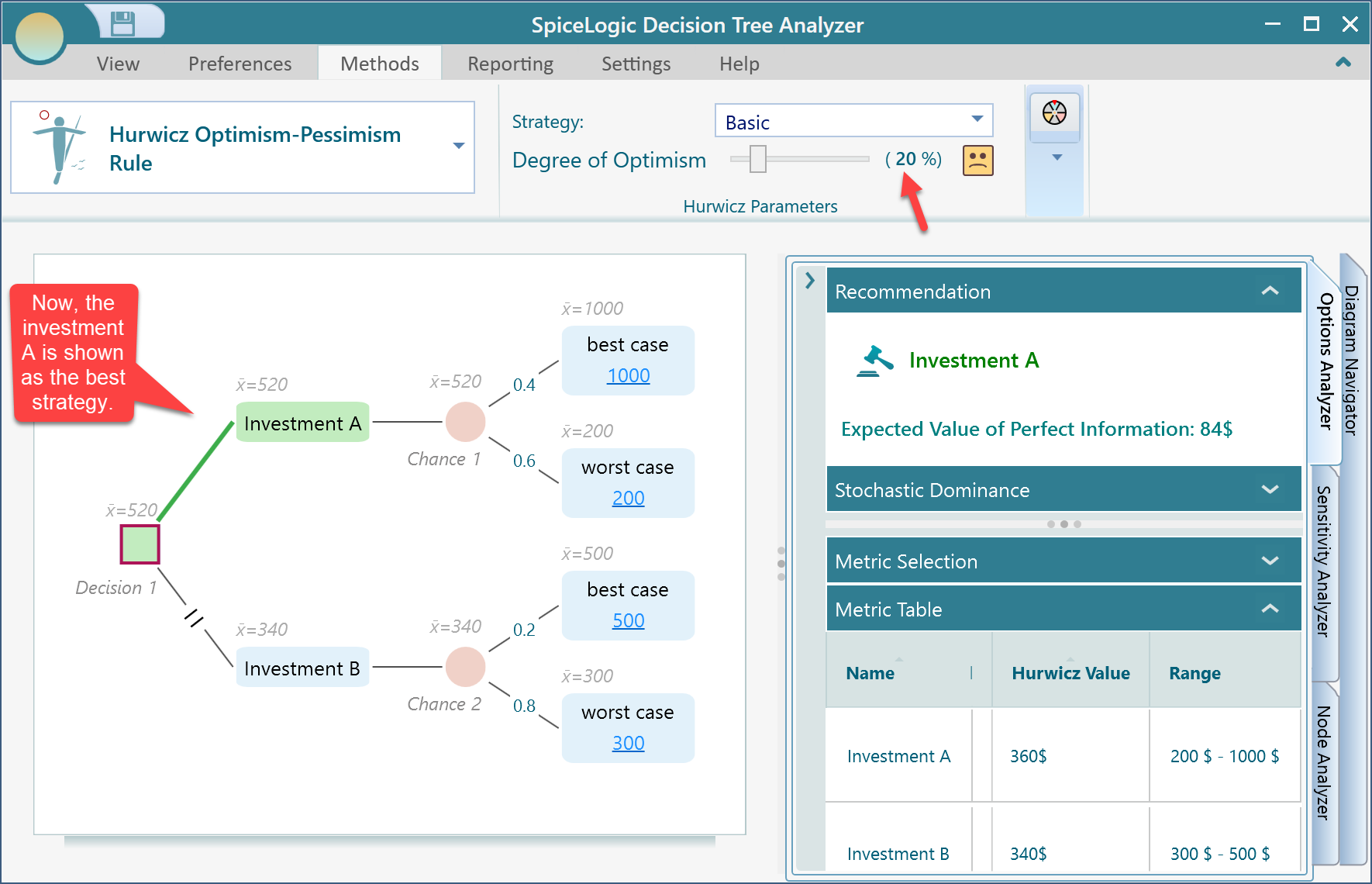 If you are familiar with and interested in the paper on the modifications of Hurwicz's decision rule, You can model APO and SAPO methods of the Hurwicz Optimism Pessimism rule. By default, the Decision Tree Software software uses the original (basic) rule. You can expand the Strategy drop-down to see the supported modifications (as shown in the following screenshot). The software supports the original basic rule and APO and SAPO (CS) modification rules. When you select the SAPO (CS) modification rule, you will see additional sliders show up in the ribbon to capture the SAPO (CS) related parameters.

With this approach, the decision-maker calculates the expected payoff for each alternative and selects the alternative with the largest value.

To use this criterion in the SpiceLogic Decision Tree Software, you need to select the Maximize Expected Utility criterion, and then, for the chance nodes, set the probabilities as Unknown as shown here in detail. 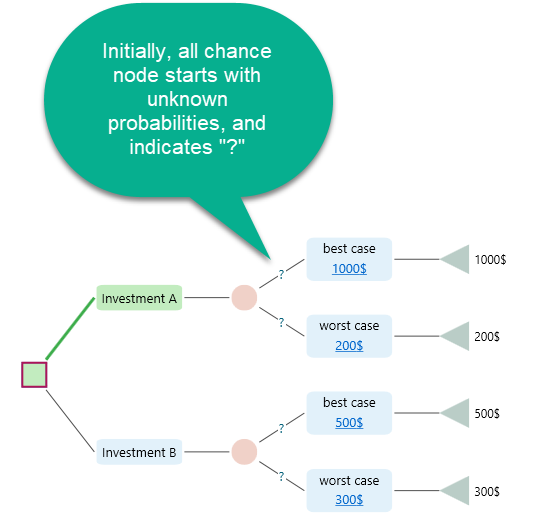 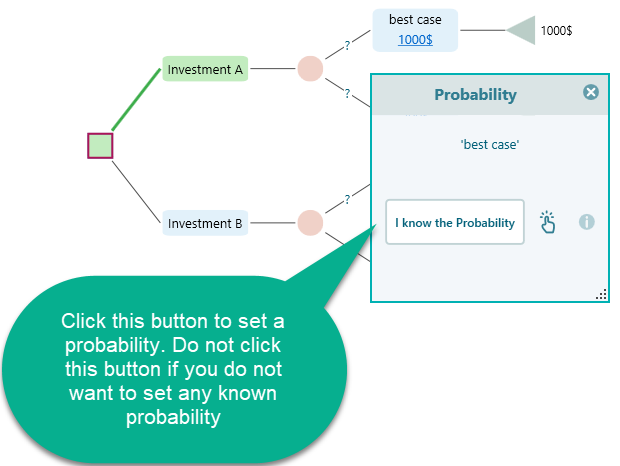 If you have already set probabilities for a chance node, you can always set them to unknown again by unchecking this checkbox. 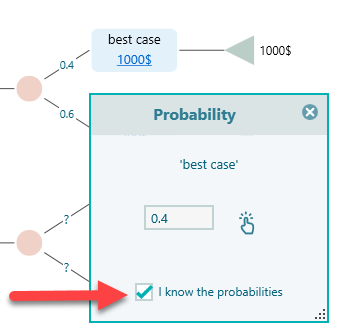