Why is Stochastic Dominance an important thing?

Stochastic Dominance is important for a risk-averse person. Imagine the following investment outcome.

Notice that, Investment 1 has an expected value of 620$, and Investment 2 has an expected value of 629.2$. So, if you just consider a better-expected value means better decision, you may choose investment 2. So far so good. But, closely notice the outcomes with probabilities. Investment 2 gives 55,000$ with a 1% chance and 80$ with a 99% chance. On the contrary, Investment 1 has a better consistent outcome. You can earn at least 340$ for its lowest chance event, (25%). And for each event, you can expect a consistently better outcome. Unless you like gambling, you may not feel comfortable choosing investment 2 over investment 1 even though investment 2 gives better-expected value. Right? Investment 1 got something that just feels like a better option than investment 2. So, is there any mathematical way to find out if an option with a random outcome is better than another option with a random outcome where the process will consider a consistency type of thing? I mean, not just looking at the final expected value, is there any metric or calculation that will consider each outcome with probability and give you confidence about which option you should feel comfortable with? Yes, the answer is, "Stochastic Dominance".

In the Decision Tree software and Rational Will, Stochastic dominance is calculated and displayed in the Stochastic Dominance Panel. You will see various notations as explained below:

Here is an example view of the Stochastic Dominance Panel where A, B, C are various Actions.

with strict inequality at some x.

We will explain this definition with an example. Consider the following scenario. 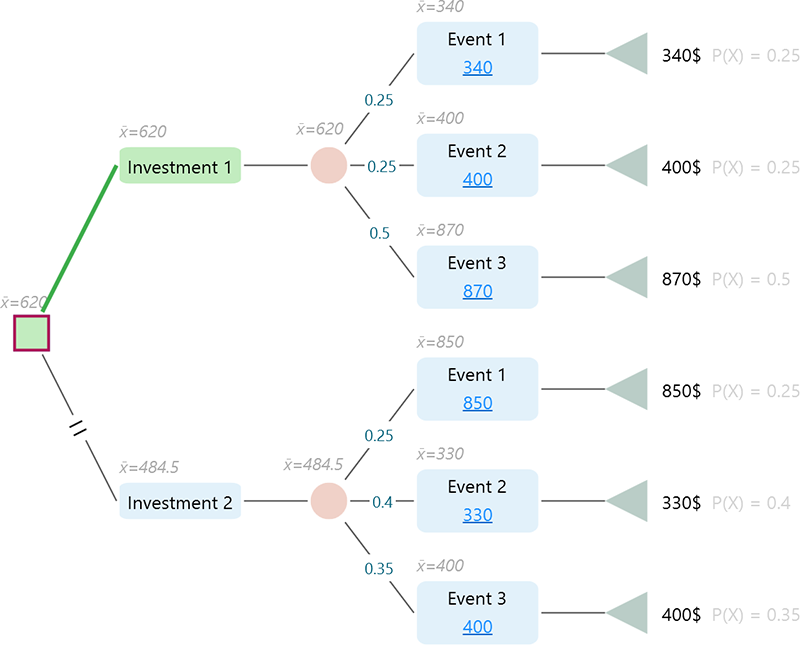 If you notice the Risk profile chart for this decision tree, you will see: 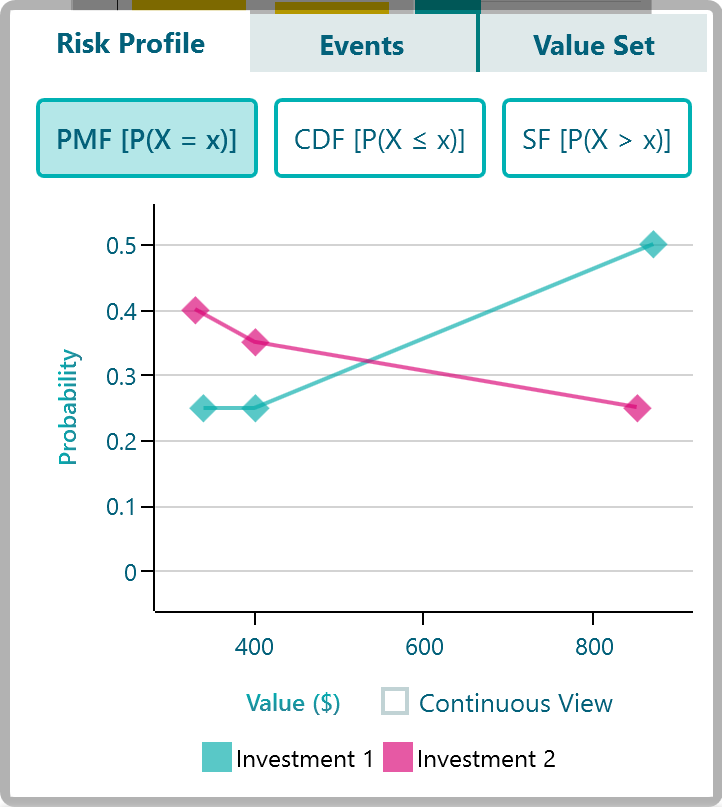 There is a button on the risk profile chart SF P (X > x). Click this button to see the survival probability distribution.

So, we can see that "Investment 1" outranks "Investment 2" according to the first-order stochastic dominance. 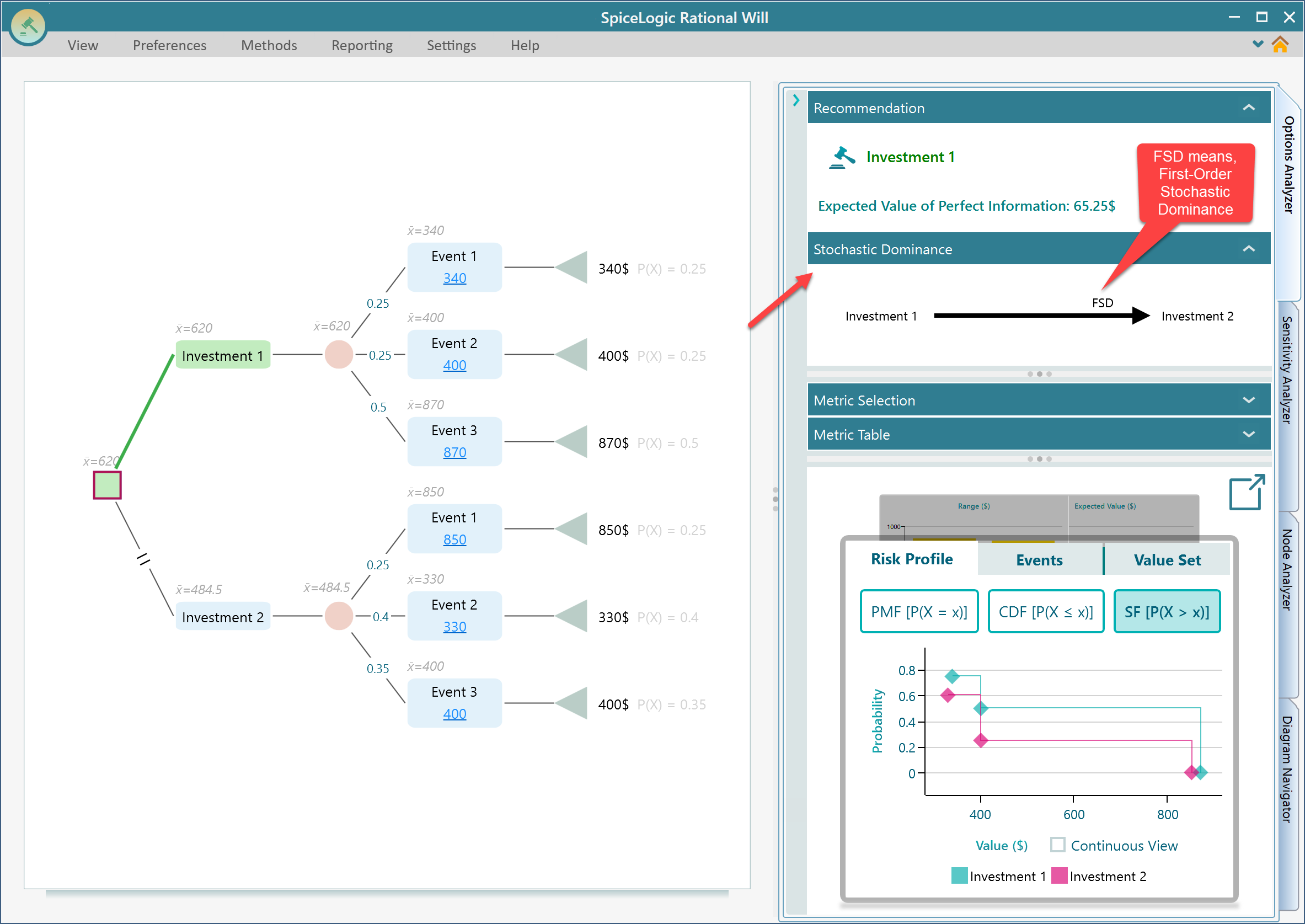 According to Wikipedia, For two gambles A and B, gamble A has second-order stochastic dominance over gamble B, if the former is more predictable (i.e. involves less risk) and has at least as high a mean. In notation form,

be the cumulative distribution functions of two distinct investments A and B. Then, For all payoff x:

with strict inequality at some x.

So, what does all mean in simple layman's terms? I will try my way of explaining this in layman's terms. Notice that, in the case of First Order Stochastic dominance, when we observed that, for each payoff segment, the probability of getting at least that payoff segment is higher for the winner option. That makes the selection easy. But what if the other option which is not the winner, gives a better payoff at some segment and makes the choice more difficult? Mathematically, you may still choose that winner option until a point even when the other option gives a higher payoff at some probability. Aaah, I hear you. It sounds confusing. Right? Ok, let's cut straight. Just notice that the same old decision tree, I increased the payoff for Investment 2, Event 1, from 850$ to 1000$. Notice the expected value for Investment 2 increased and that makes investment 1 a little less attractive than before. But still, investment 1 is a better option stochastically. So, this time we say, "Investment 1" stochastically dominates "Investment 2" by second-order.

be the cumulative distribution functions of two distinct investments A and B. A dominates B in the third-order if and only if 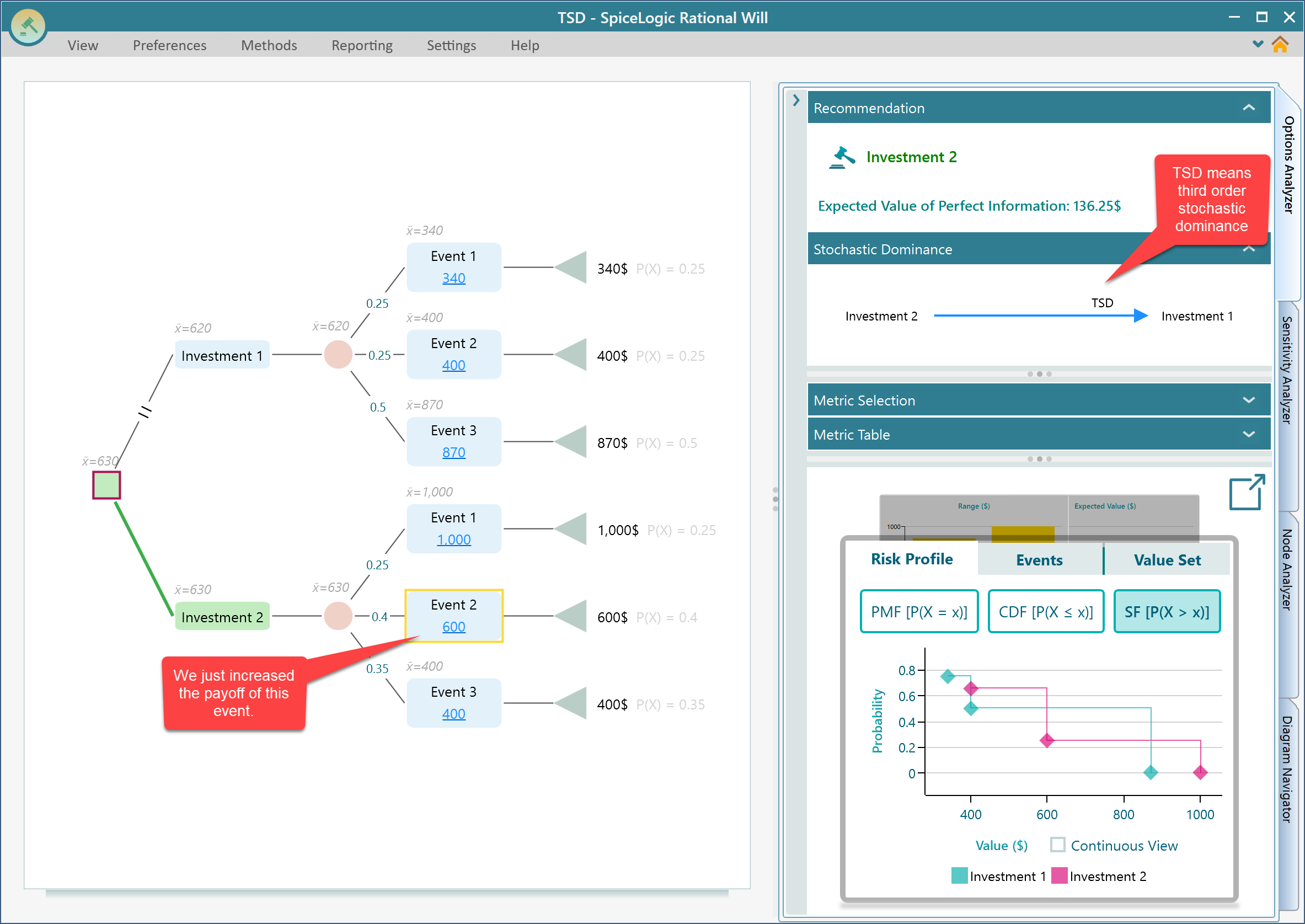 Other kinds of dominance

The Decision Tree software and Rational Will also shows some other kind of dominance, like 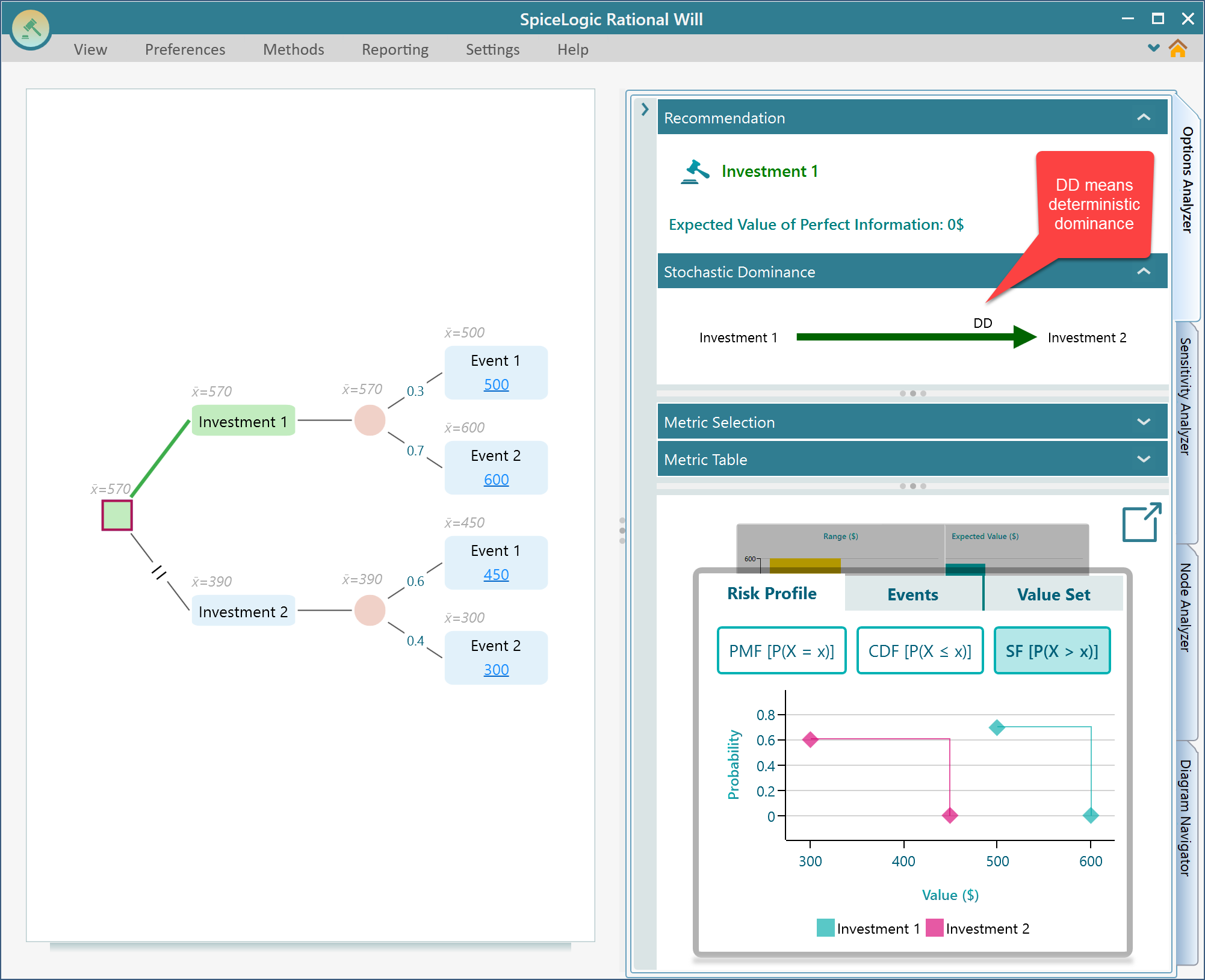 Many times, a stochastic dominance cannot be found between two random outcomes. In such cases, the SpiceLogic Decision Tree software and Rational Will software check if there is another way to determine one set of uncertainties are better than another set of uncertainties. And that is the "Mean-Variance" dominance. We know that a lotto or any other million-dollar lotteries are examples of a very high standard deviation. And only those who like to gamble will choose an option with a random outcome that has a very high standard deviation. Right? When comparing two options, an option with a lower standard deviation gives a more consistent outcome than the one that has a higher standard deviation. Say, an option named A has a higher expected value than option B. Also at the same time, option A has a lower standard deviation than option B. Obviously, in that case, Option A is better than Option B, not only because Option A has a better-expected value, but also it has lower variance. This kind of dominance is shown as "mean-variance" dominance in this software as shown below.

If you have more than two options, then you may find one option dominates another option by first-order stochastic dominance and another option by second-order stochastic dominance. It becomes interesting to see how those options are dominating each other by what degrees. The SpiceLogic Decision Tree software and Rational Will software will show you a diagram of dominance like this. 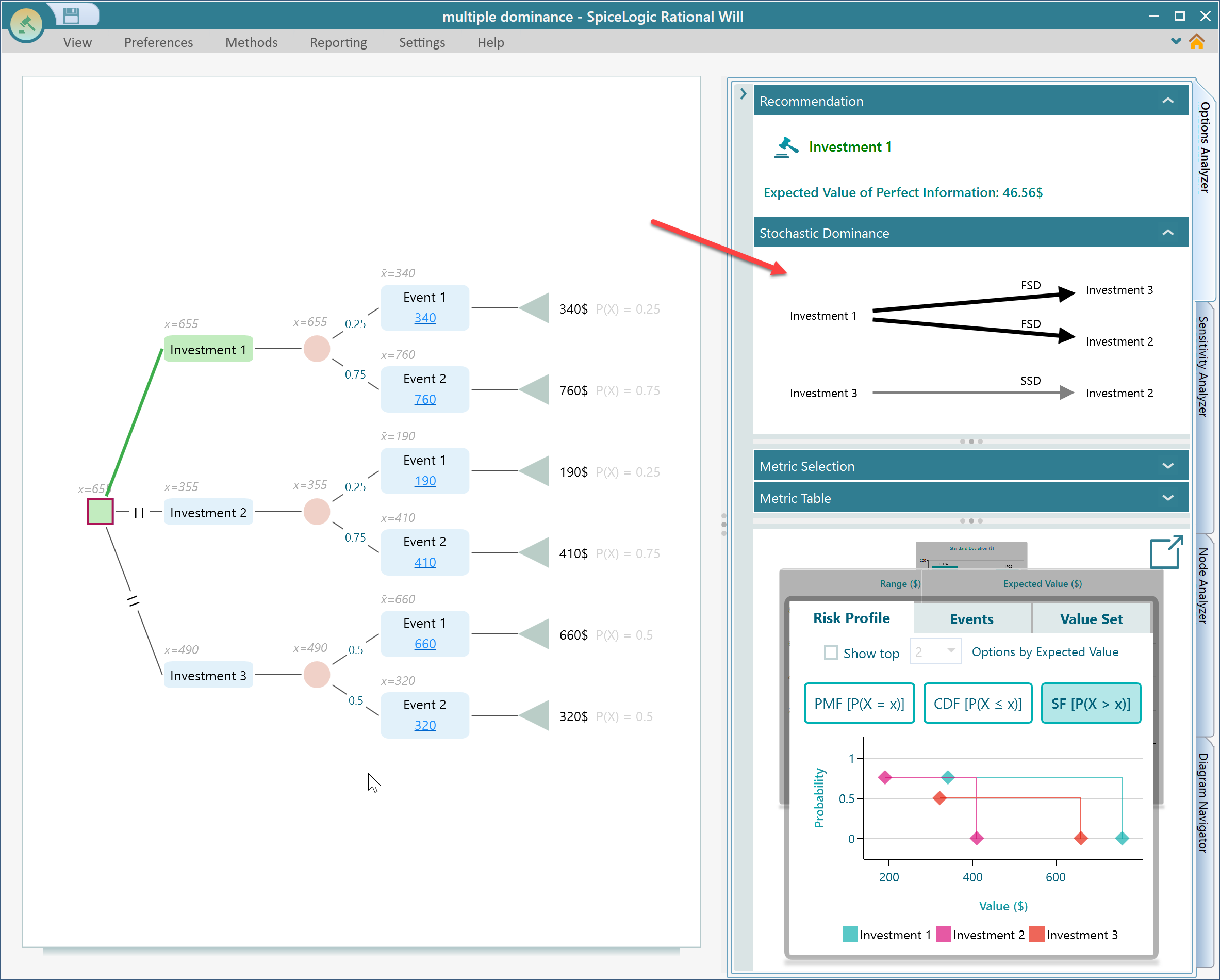 Last updated on Feb 13, 2022
Monte Carlo Simulation
Index Page
Introduction to Utility Function
This website uses cookies to ensure you get the best experience on our website.