Getting Started with the Bayesian Network

A Bayesian network (belief network) is a probabilistic graphical model that represents a set of random variables and their conditional dependencies via a directed acyclic graph (DAG). In the Rational Will or the Bayesian Network Software from SpiceLogic, you can easily create a Bayesian Network and query the network. You can instantiate a random variable upon observation of a state and the whole network is updated based on the evidence. Intuitive charts are presented to indicate the Root Cause Variables and Ultimate Symptoms variables. 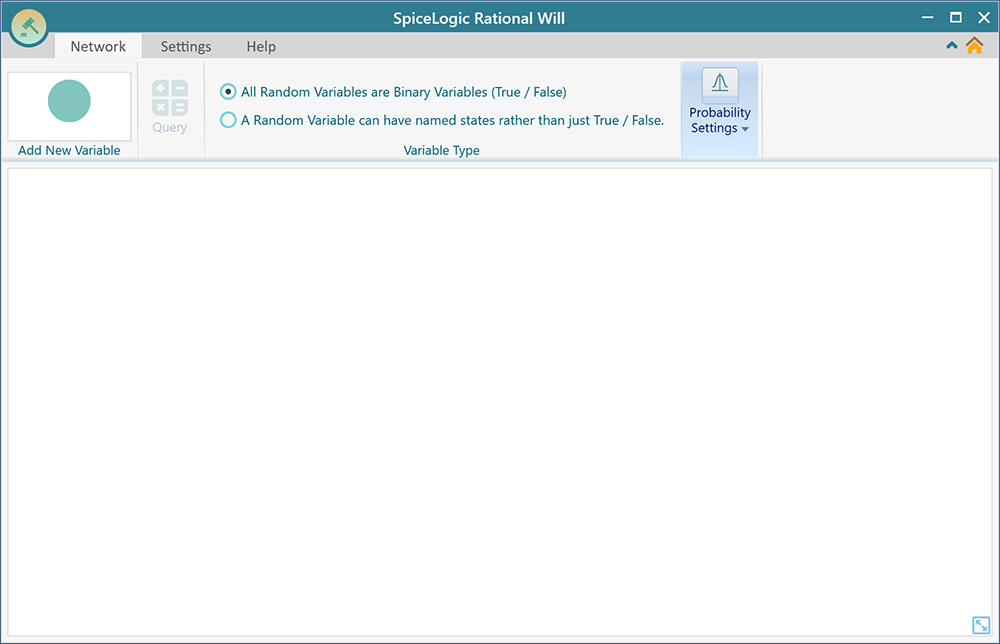 Bayesian Network tool is easy and simple enough that you can simply drag and drop a new variable node from the toolbar and connect the variables using arrows. 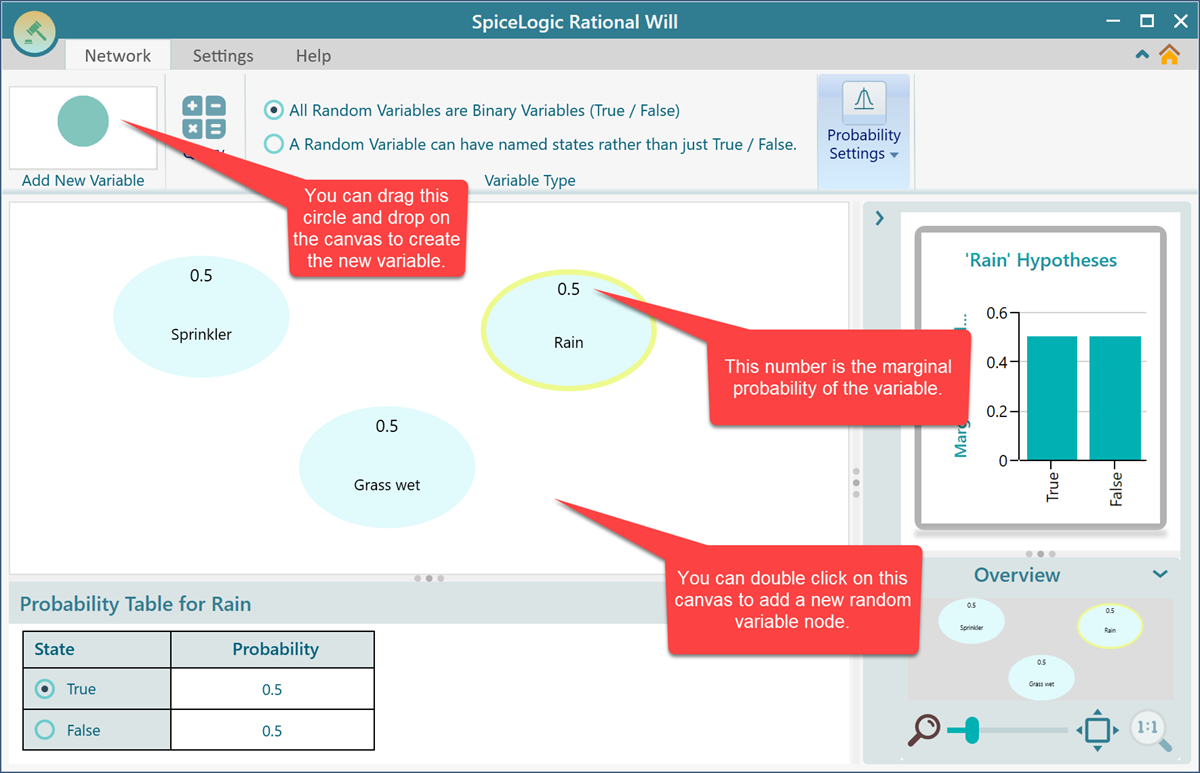 A node is added, you can double click on the node to edit the name of the variable. 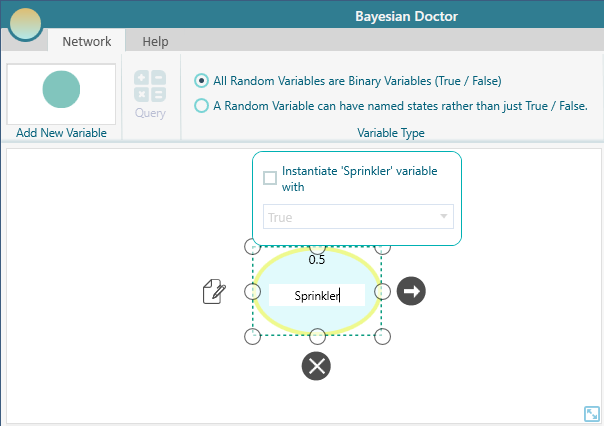 You can add a note for the node from the flyover menu. 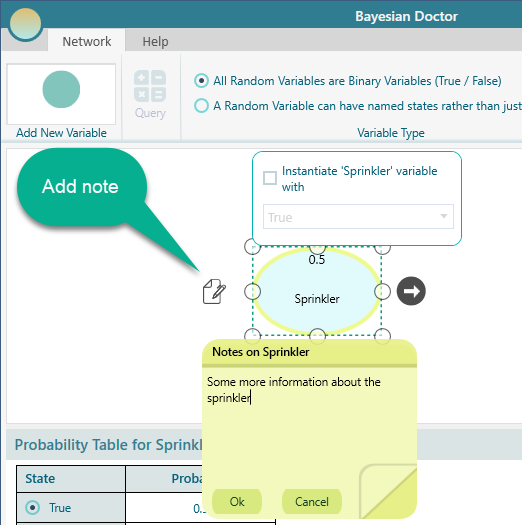 Once a note is added, it looks like this on the node. 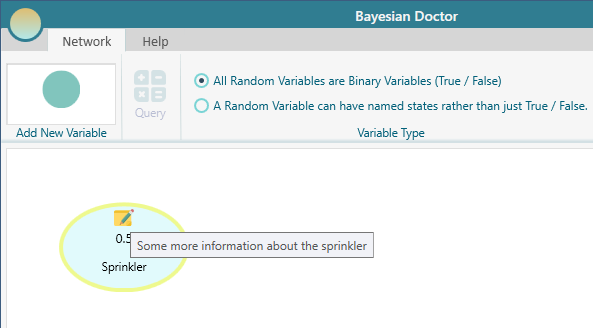 Once the nodes are added, you can connect them to represent probabilistic relationships. Finally, after connecting the arrows, the diagram will look like this: 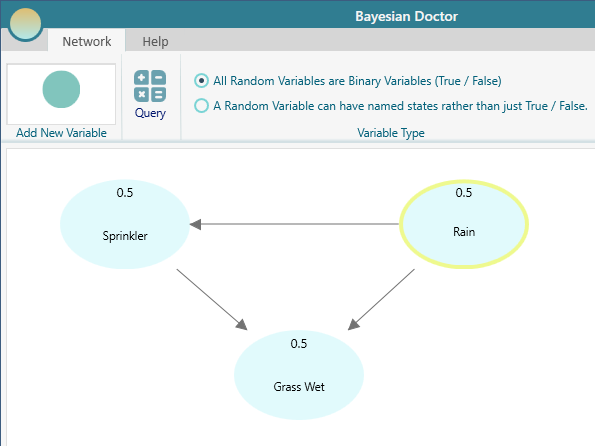 Now is the time to set probabilities. 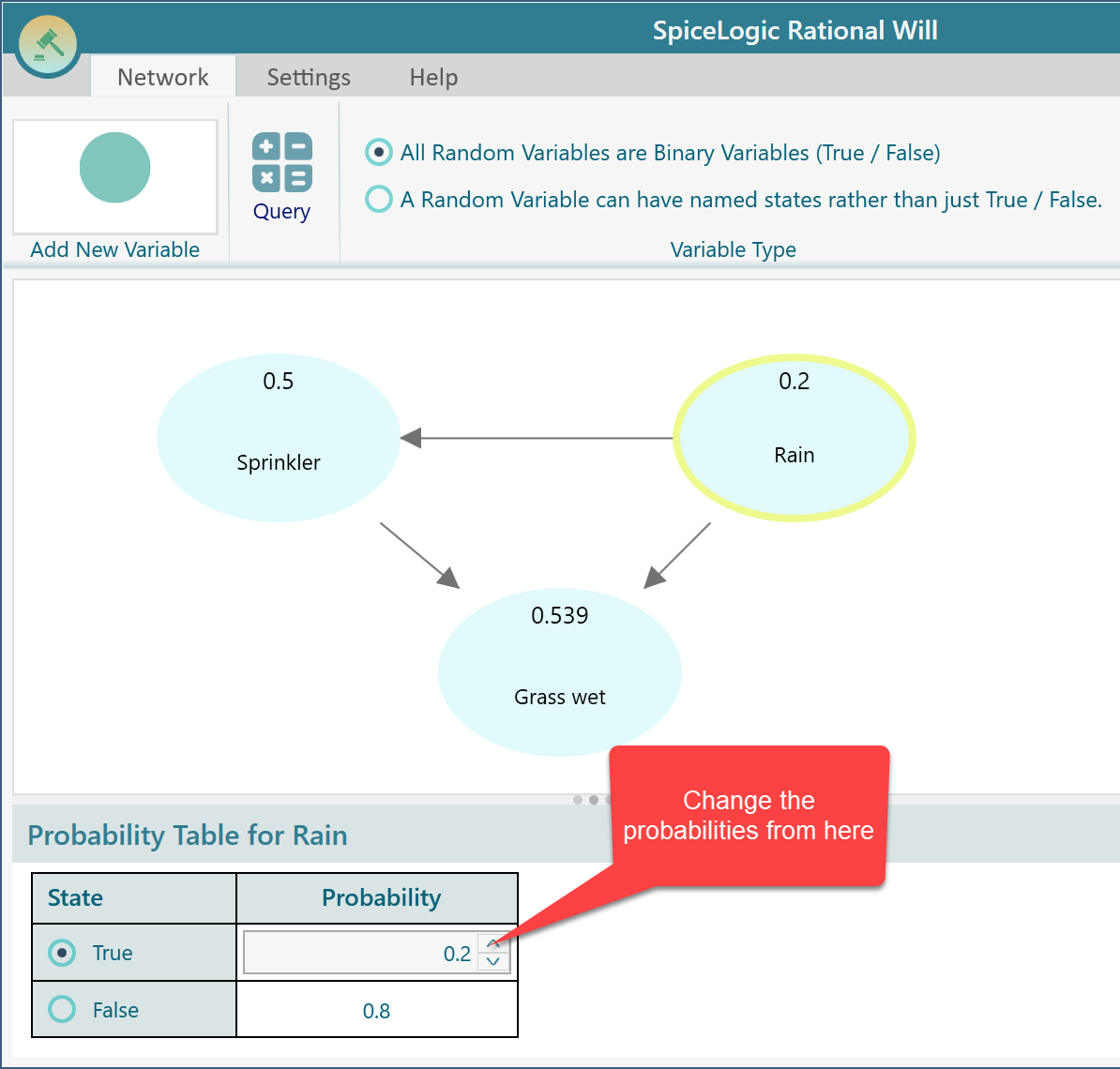 In the same way, set the conditional probabilities of the "Grass Wet" node by selecting that node and editing the numbers by double-clicking on them. 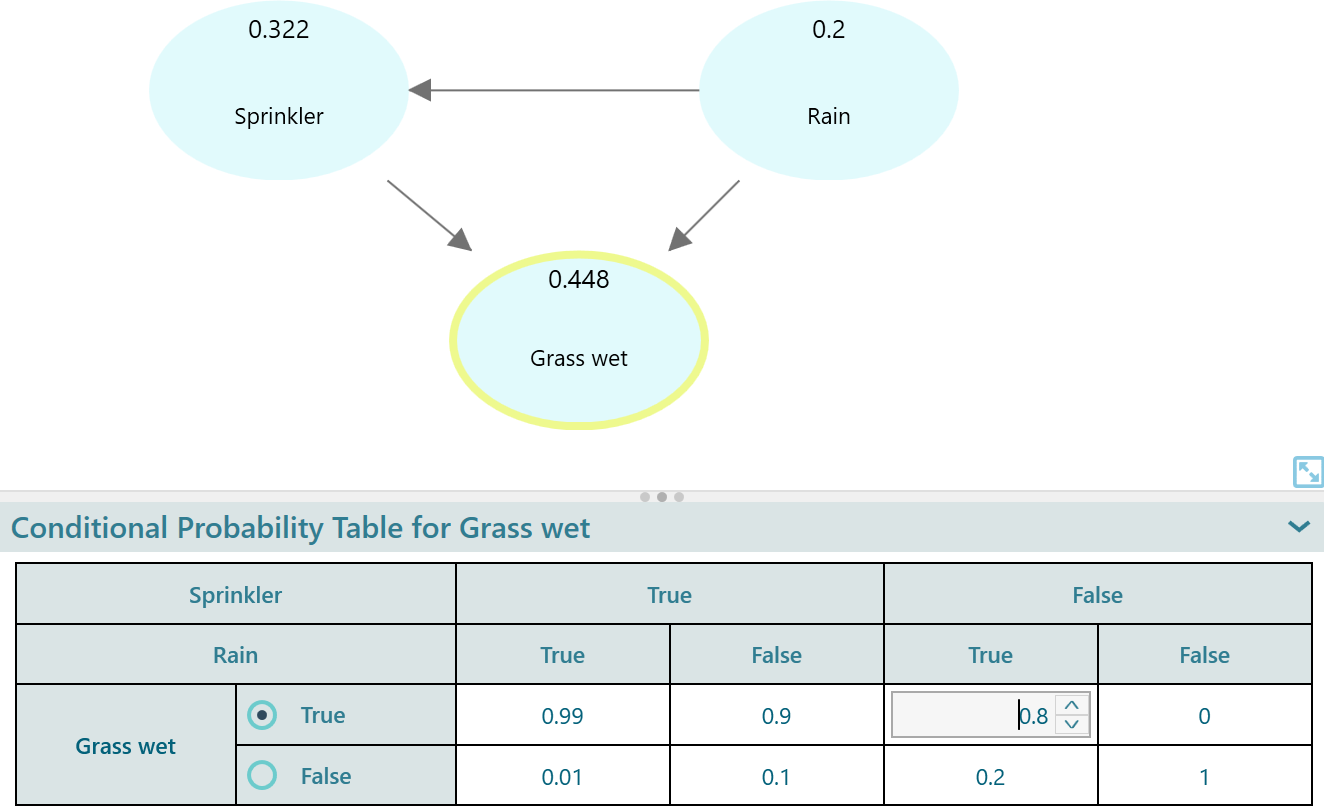 Say, you want to Query, what is the probability that Rain is true, GIVEN Grass Wet is True? 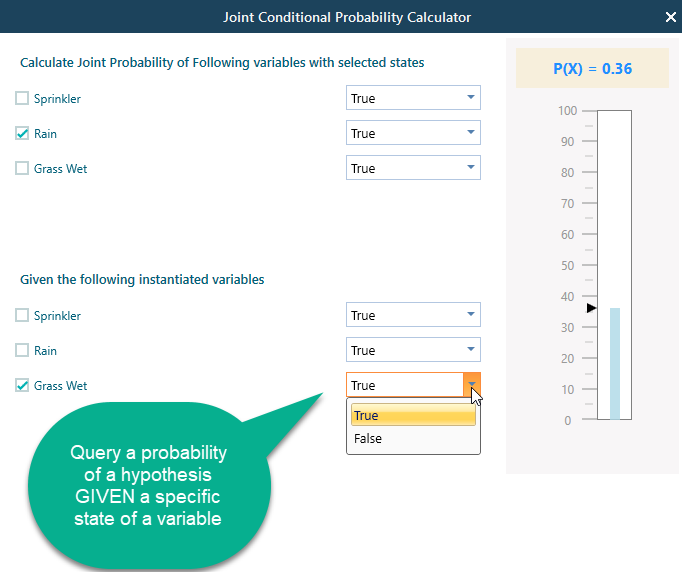 Say, you want to know, what is the probability that Rain is True AND Grass is Wet is False. You can find that as shown below. 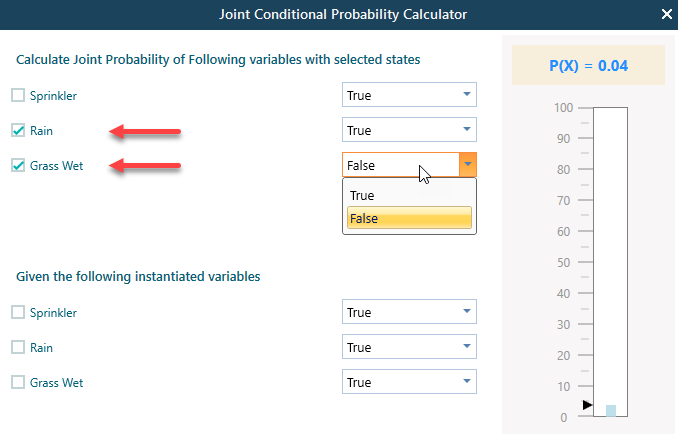 Instantiate a variable upon evidence

When you get evidence for a variable state, (i.e. you observed the Grass is wet), then you can instantiate the Grass Wet variable with the True state as shown here. 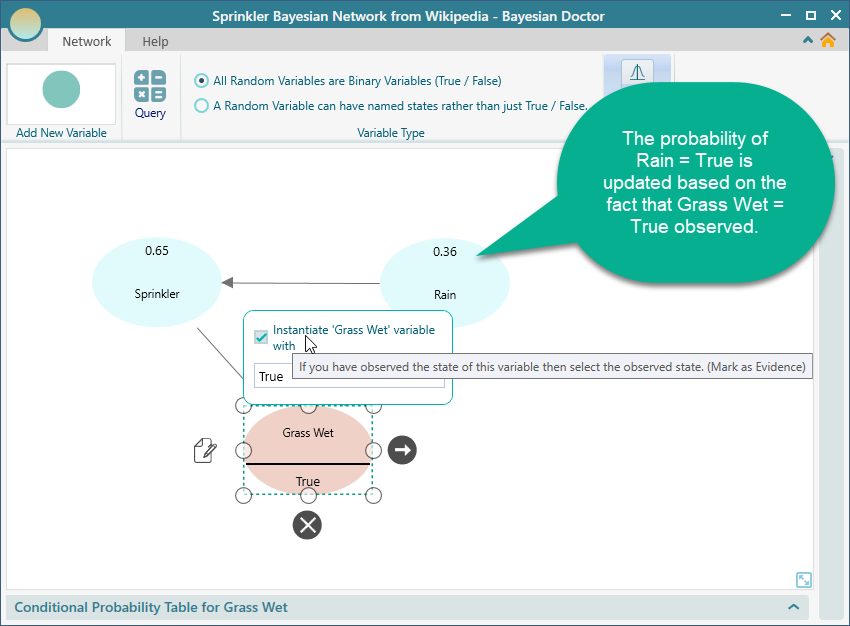 Notice that, when you instantiated the Grass Wet variable to True, the probability of Rain = True is automatically calculated and displayed in the "Rain" node. You can see that the Rain node is showing a probability of 0.36.

You may ask, how to define what state probability of the Rain variable will be displayed in the Node. You can set that from the Probability table. Notice the Radio button beside the state name. The checked radio button determines which state should be tracked in the node and in the chart.

Last updated on Feb 23, 2022
Introduction to the Bayesian Tools
Index Page
Getting Started with the Bayesian Inference
This website uses cookies to ensure you get the best experience on our website.