The base rate fallacy is also known as base rate neglect or base rate bias.

When evaluating the probability of an event―for instance, diagnosing a disease, there are two types of information that may be available.

Using Rational Will or the Bayesian Network Software from SpiceLogic, you can incorporate these 2 types of information to judge a probability of an event or a hypothesis.

Now suppose a woman gets a positive test result. What are the chances that she has cancer?

Now, we need to find out Pr(C|R) = the probability of having cancer (C) given a positive test result (R).

You can model this problem in the Bayesian Network Software or the Rational Will and get the same result easily without doing the calculation by hand. The software will give you a pleasing way to visually depict the problem and see the result in the graphical interface.

Start the software and choose the "Bayesian Inference"

Now, you are In the Bayesian Inference area. Add your Hypothesis that the woman has cancer.

Now, click the Lock button to "Lock" your prior beliefs.

Now, in the Experiments and Observations panel, add a new experiment as "Mammogram test". Under that experiment, add observation "positive test result". 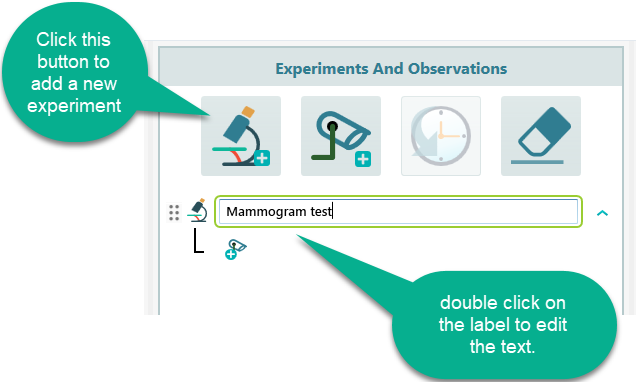 Then, under the added experiment, add a new observation "positive test result". 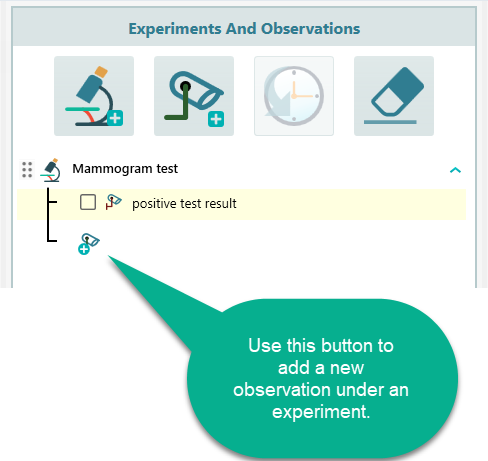 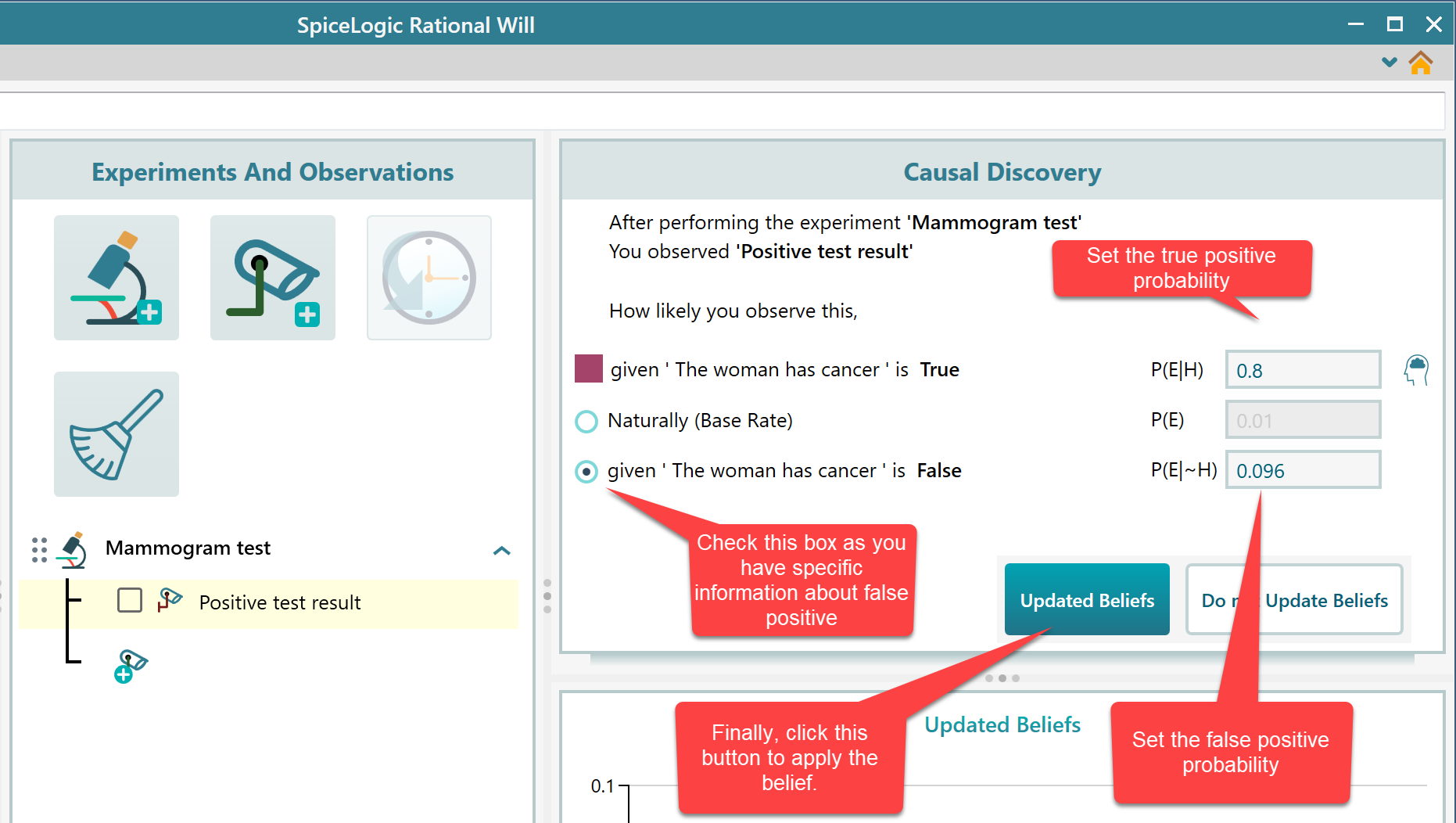 Once you set the True positive and False positive probabilities, click the "Update Beliefs" button. The software will calculate the updated belief based on this information using Bayes Theorem and update the chart of 'Updated Beliefs'. We can see that the probability of the woman having cancer is calculated as 7.76%. This is the new calculated belief that incorporated the base rate in the calculation. Remember that, this is the value we got from our hand calculation. 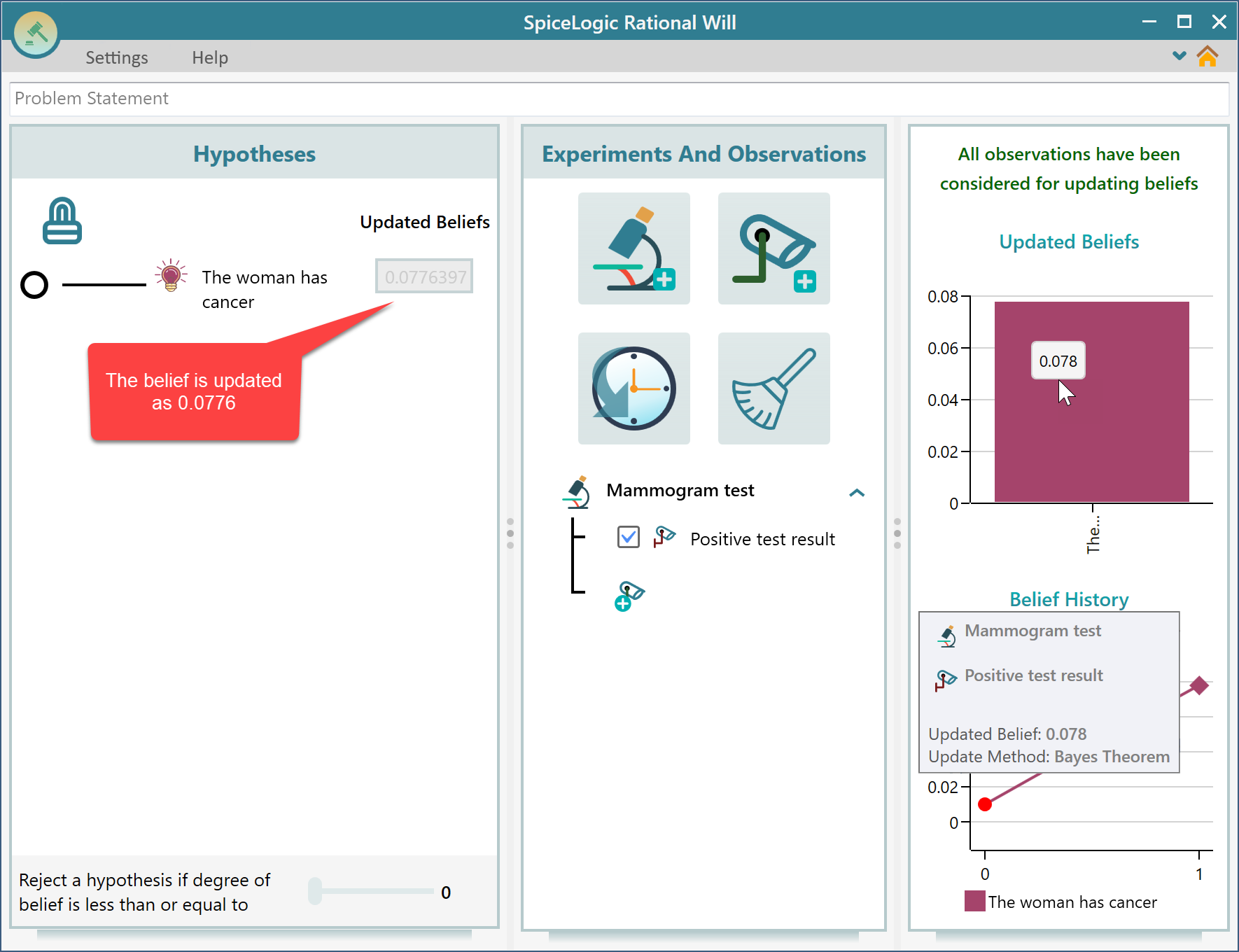 Notice the belief history chart. It shows, how your belief is updated over time, upon evidence. This is an example of Diachronic Interpretation. In the Hypotheses panel, your hypothesis probability is updated as well. 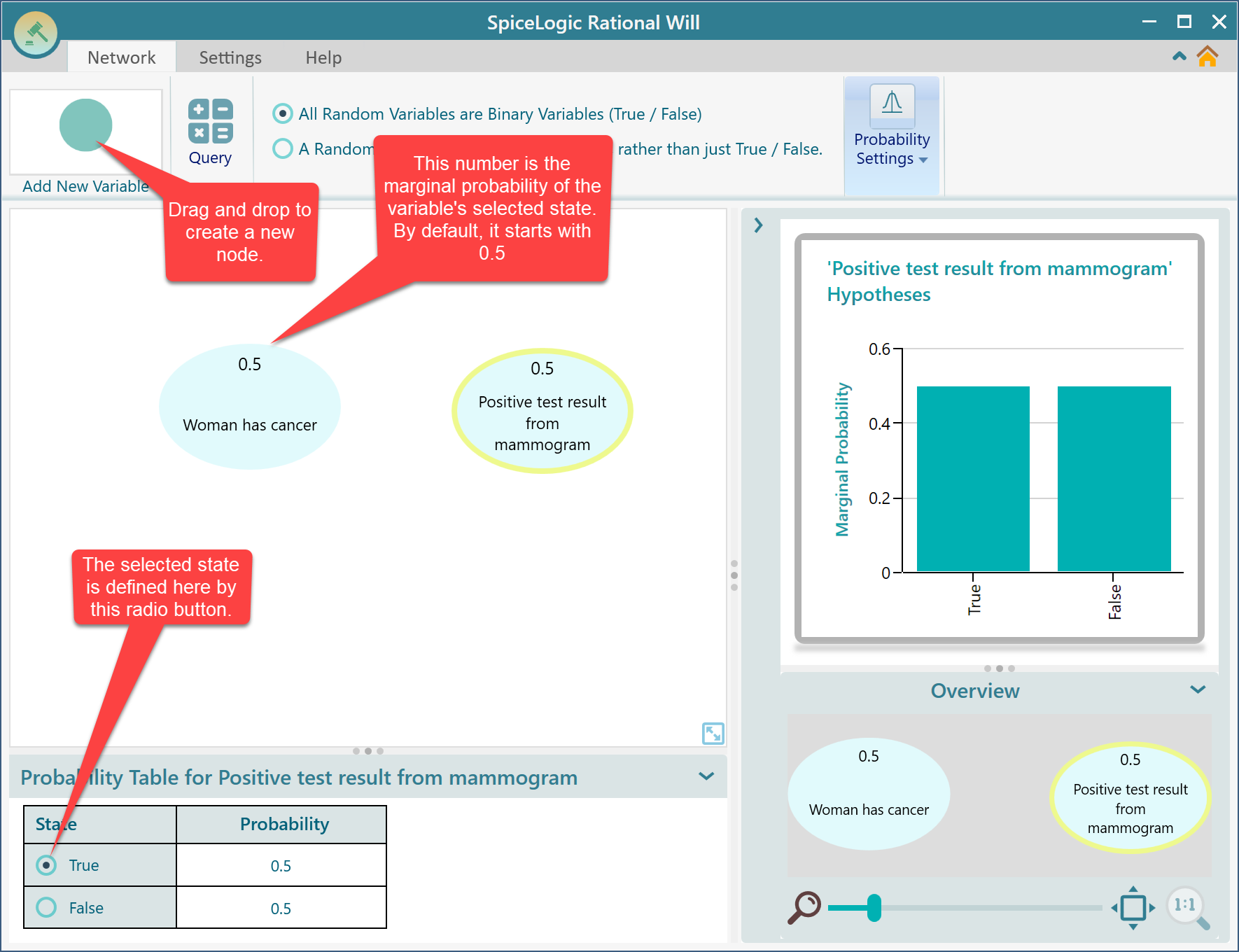 We have a base rate information that 1% of the woman has cancer. So, set the True state variable for 'Woman has cancer' = 0.01. The False state probability will be calculated automatically as 1 - 0.01 = 0.99 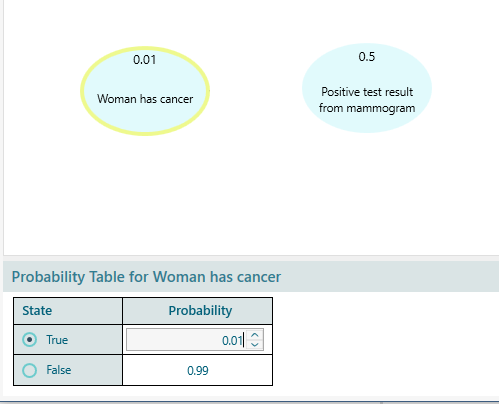 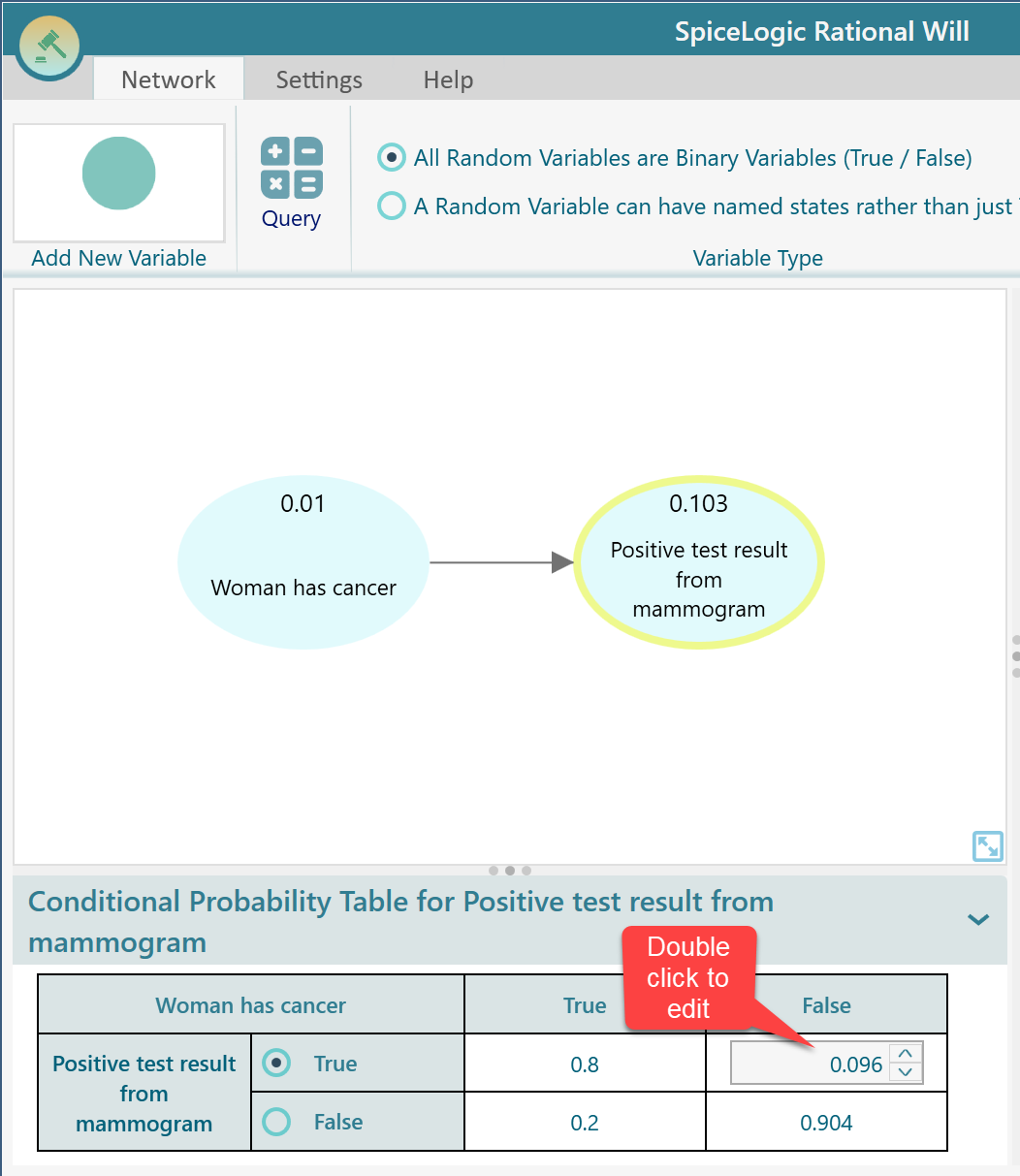 Thus, we have modeled the Bayesian network for this problem. Now, we want to find out what is the probability of the woman having cancer if we observe a positive test result. In order to find that out, select the node "Positive test result" and check the checkbox "Instantiate..."

Notice that, as soon as you instantiate the variable, the "Woman has Cancer" node's marginal probability is displayed as 0.0776. This is the number we got from our hand calculation. So, the diagram confirms that our calculation result was correct. That is the number we were looking for. That means, the Bayesian network calculates the probability of Cancer given that a Positive test result was observed. 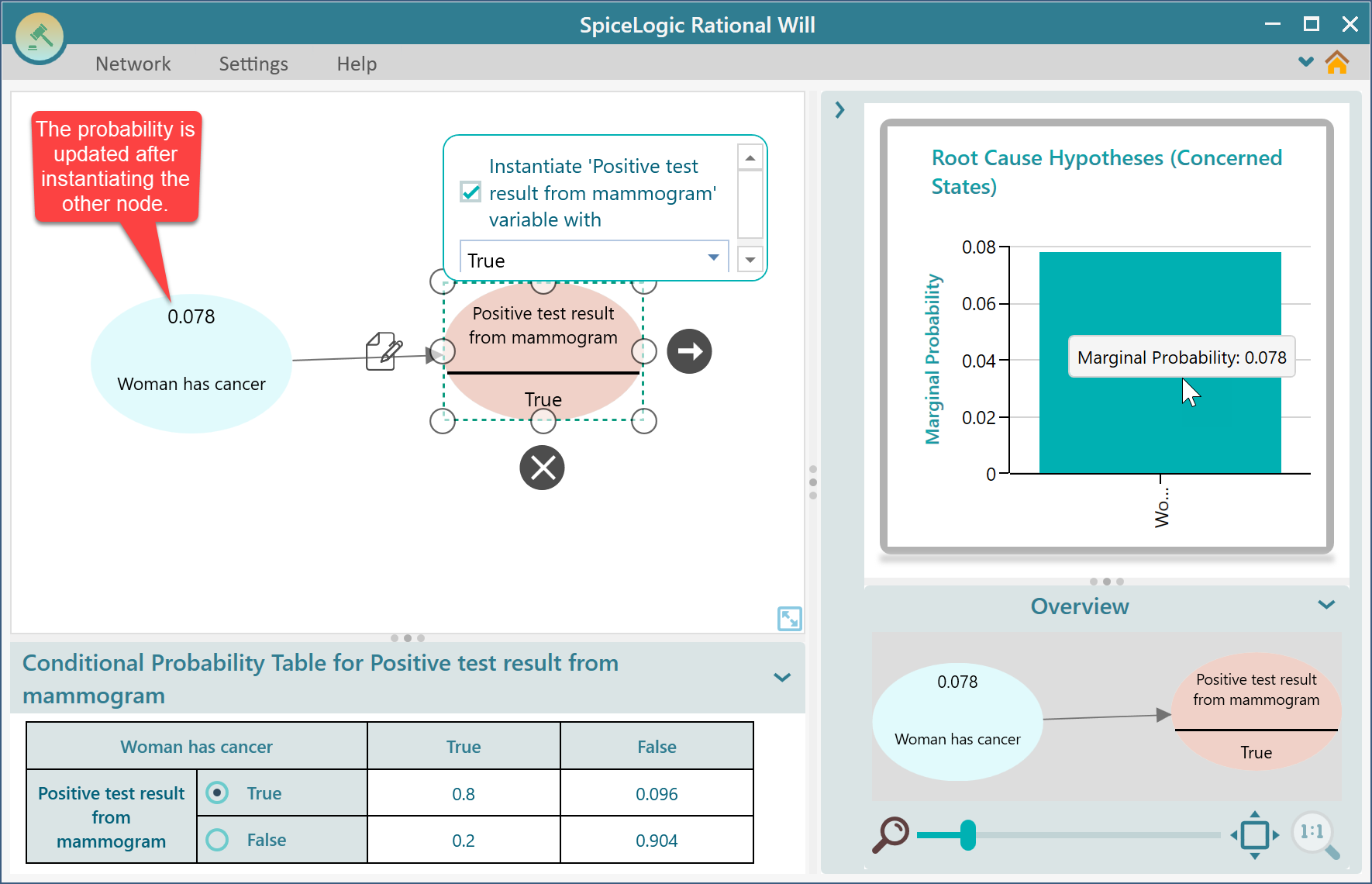 There is another way to find out the probability without instantiating in the diagram. You can open the Query window by clicking the Query button. Then, in the query window, in the top panel, you can check the "Woman has Cancer" and select "True" in the drop-down for Cancer. Then, in the bottom panel, check "positive test result..." and select "True" in the corresponding drop-down. You will see the calculated probability value will be shown as P(X).

Last updated on Feb 24, 2022
Decision Tree with Bayesian Inference
Index Page
Getting Started
This website uses cookies to ensure you get the best experience on our website.