If you want to look back your past year, yes, you know the value of revenue and expense from the past year. You can plug in those numbers to the given equation and get a value for Profit, which is also a calculated and known number.

You may think of a way to estimate the range of possible values of profit like this:

So, your refined formula for calculating profit should become:

Monte Carlo Simulation is a technique that performs random sampling to achieve such a goal. So, let's clarify what Random Sampling is.

Think about this probability wheel or a roulette. 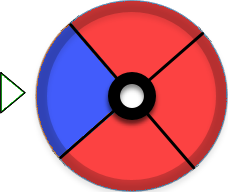 If you spin this roulette and stop, what do you expect to get on average? "Red" or "Blue"? You can expect that, out of 4 times, 3 times you may get "Red" and 1 time you can get "Blue", right? Because red covers 75% of the disc and blue covers 25% of the disc. In another word, "red" and "blue" follows a probability distribution, as red -> 0.75, blue -> 0.25. Random Sampling is a sampling technique, where a probability wheel is created according to the probability distribution of various numbers and taken a sample from the probability wheel.

For example, say you have probability distribution like this:

How Monte Carlo Simulation can evaluate the function of Random Variables.

Ok, so far, you understood what a Random Variable and Random sampling are. Say, you are a project manager of a project where you need to predict the profit of your next project, where you have evaluated the probability distribution of Revenue and Cost from various statistical data.

Say, your Revenue follows a Probability Distribution (Normal Distribution) as shown below. 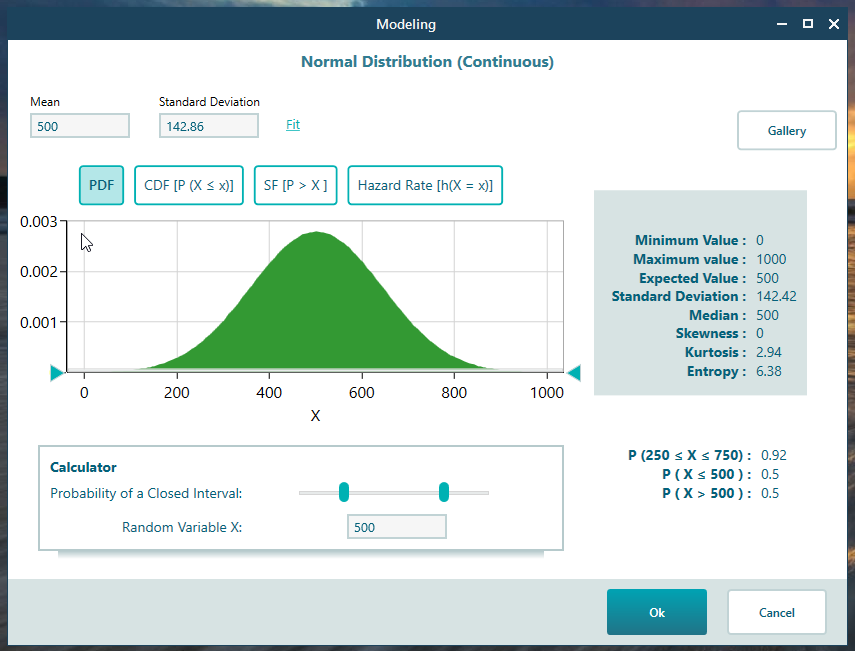 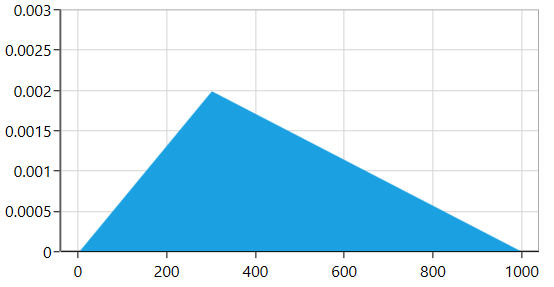 As we already mentioned, if you think of creating many combinations like:

After taking thousands of samples, you can organize the sample data to a histogram, where, on the X-axis indicates a range of profit, and the Y-axis represents the number of random samples fell into that profit range.

As we get the total count for each profit range, we can get the probability of a range as :
sample count in a range/total samples (which is 10,000). 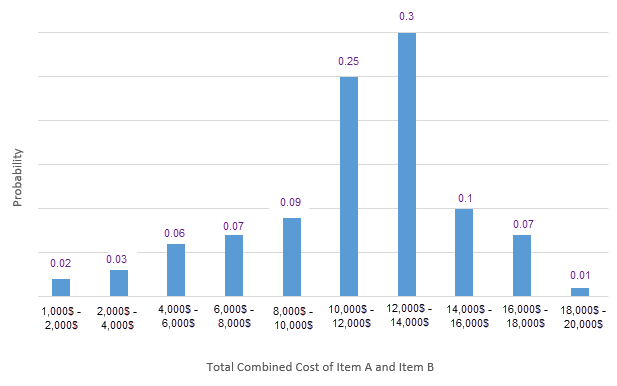 This way of finding an ultimate probability distribution of a dependent random variable is called "Monte Carlo Simulation".

Start the Decision Tree analyzer and model a simple decision-tree like this, where there are just one Decision Node and one action. 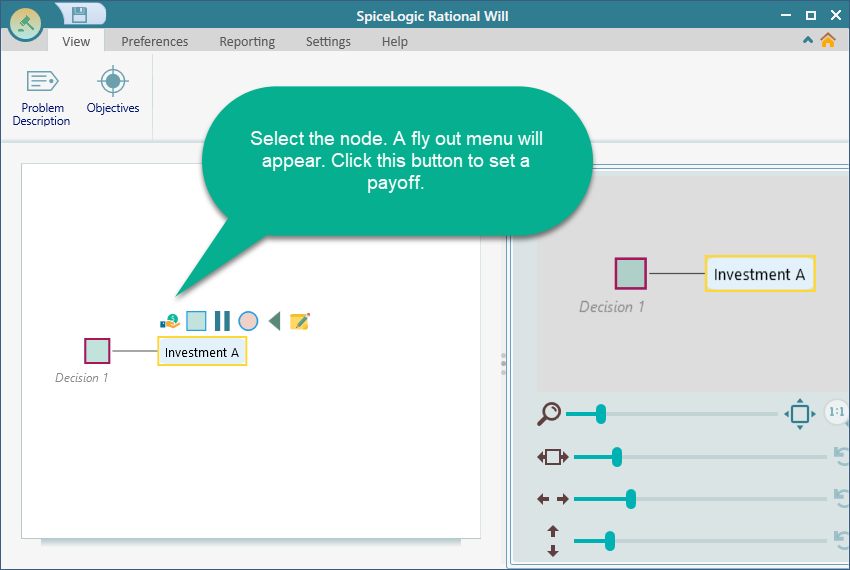 Once you click the "Pay off" button, the objective modeling wizard will start.

Then, select the "Numerical Type" button when the following screen appears.

Then click the button "Proceed". You will be asked if you have another objective to add. Click Yes. And then, in the same way, create a numerical objective "Minimize Expenses".

Once you are done adding the second objective, answer "No" when you are asked to add another objective.

Now, you will be asked to set up a trade-off between the criteria, in order to form a multi-criteria utility function. You have various choices like Pairwise comparison, custom expression, etc. Lets chose the Custom Multi-Criteria Utility Function from the following screen.

Then, click the "Proceed" button. You will be taken back to the Decision Tree. The payoff editor will be shown. You may enter simple values for Revenue as 500$ and Expenses as 300$. You will see that the node shows the value as 300$, which makes sense, as according to our custom expression, Revenue - Expenses = 500 - 200 = 300. 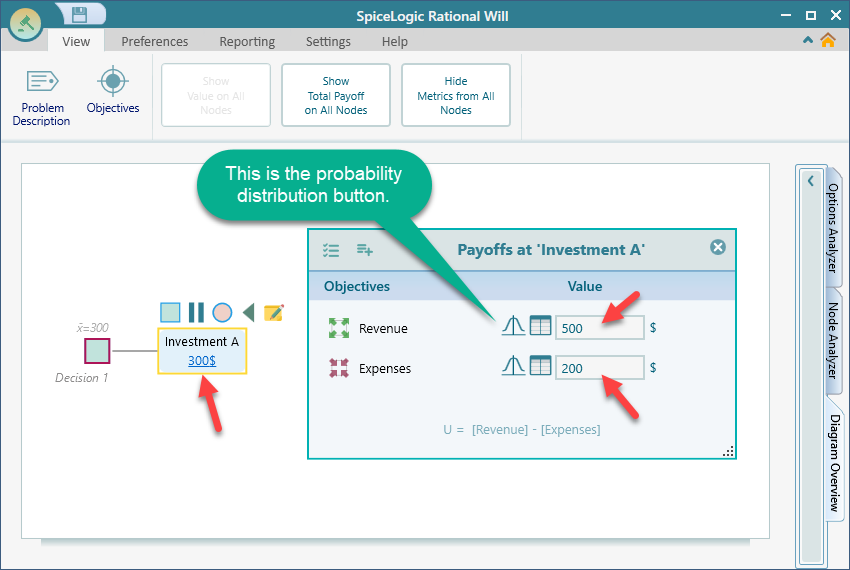 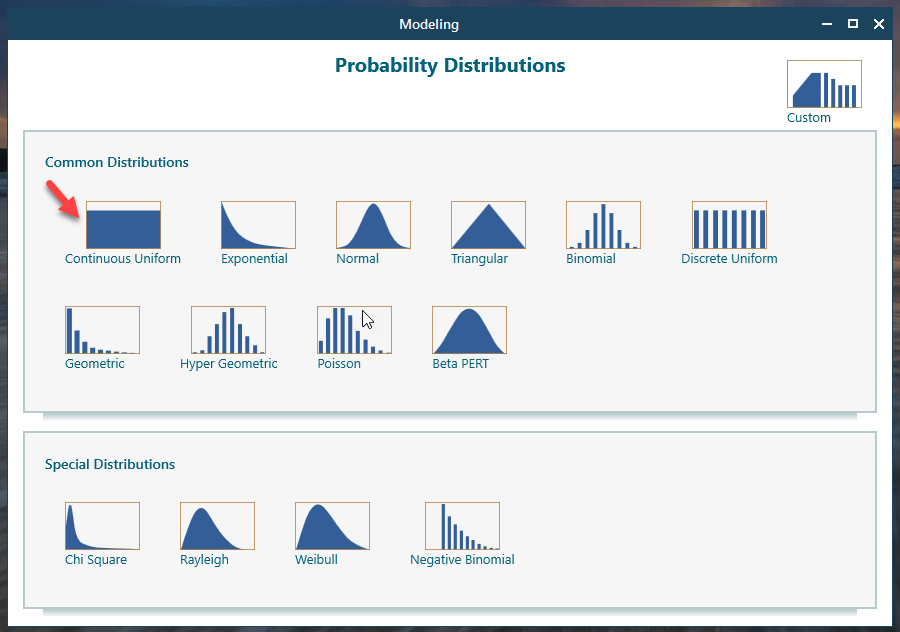 We just left the default setup and clicked the OK button. 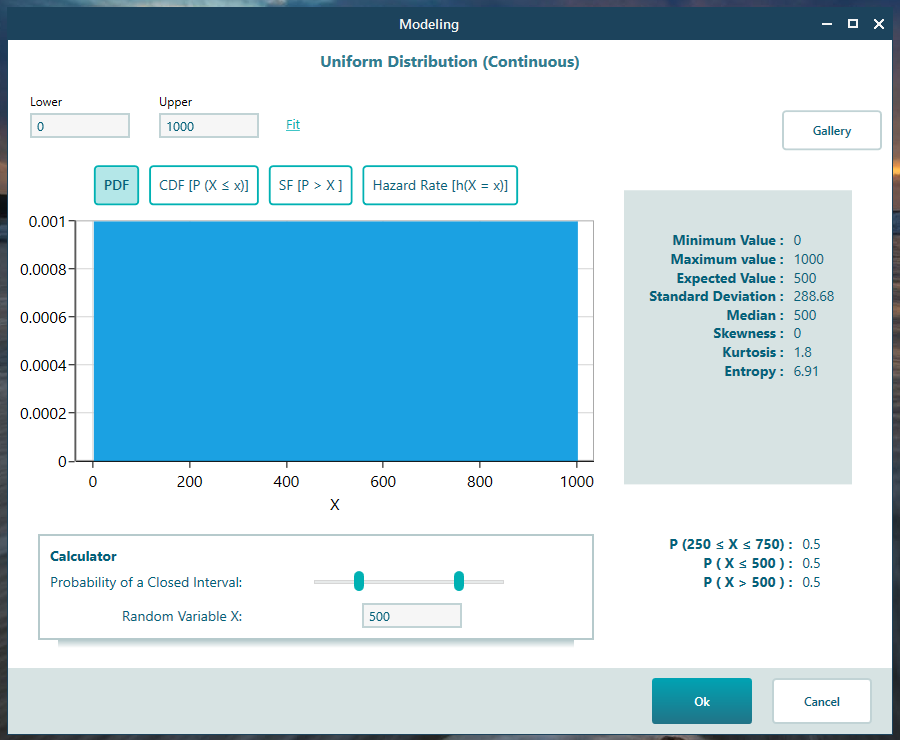 Finally, the payoff editor in the Decision Tree diagram will look like this. 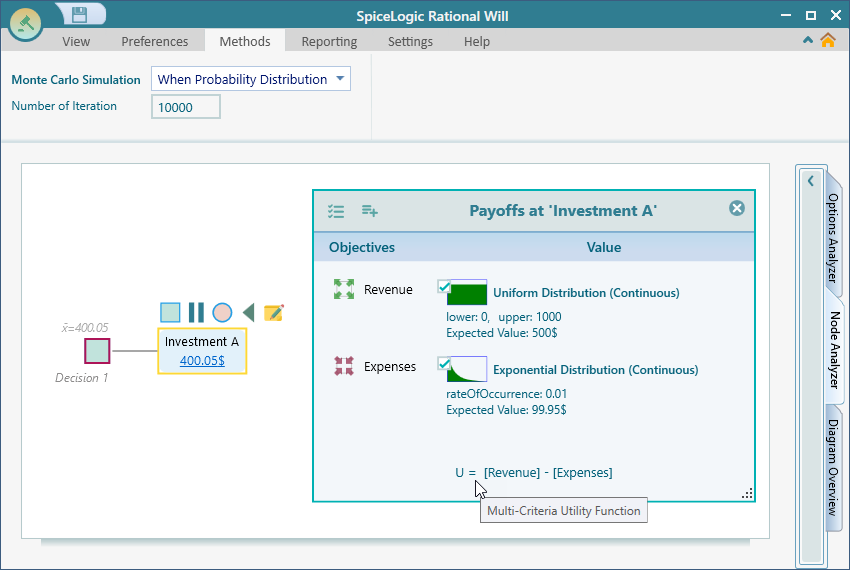 Alright. now, let's see the magic. Keep the action node "Investment A" selected in the diagram and expand the tab "Node Analyzer". Also, in the Ribbon, you will see a number box for "Number of Iteration" under "Monte Carlo Simulation". Set that to 10,000. A higher number of iteration gives a better result.

If you add another action node to the Decision Node, then based on Monte Carlo simulation, the action that gives higher expected value, can be chosen as an optimum action.

Random Function as a decision tree

Lets model something for real. Say, you are planning for a vacation where you can go by car or by plane. If you go by car, your car can break down on the road and it may cost a variable amount of money. Also, you know that the cost of a plane ticket does not stay the same. It changes all the time. Assuming that you have learned how to create a decision tree using the Decision Tree software. Let's create a decision tree like this: 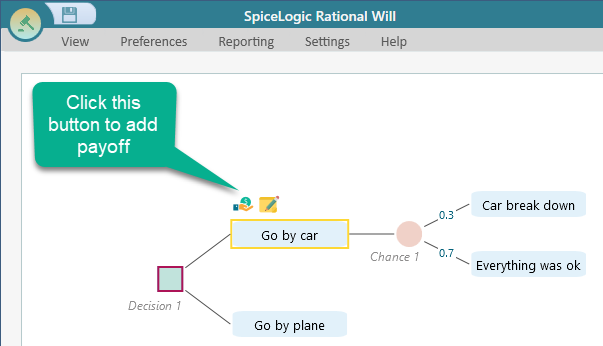 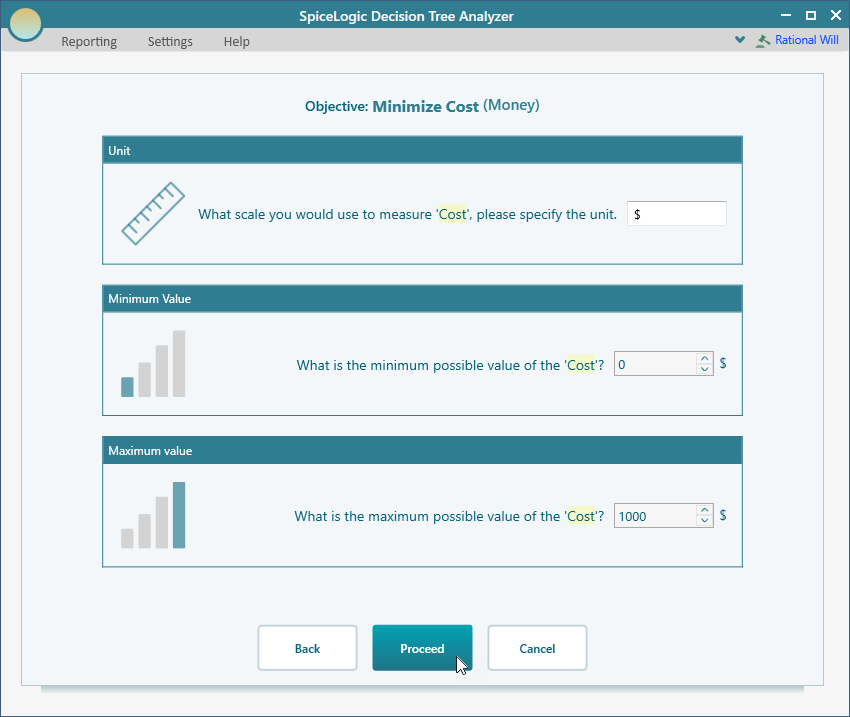 Then, click Proceed. When you will be asked, if there are any more objectives to add, answer 'No', and then, you will be taken to the decision tree, like this. 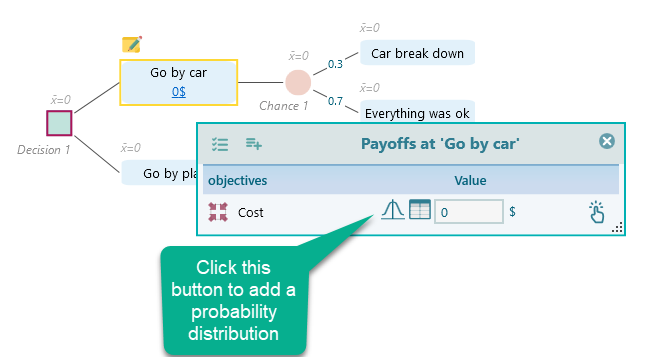 Say, your cost for driving by car, can be anywhere from 100$ to 500$, because, you do not know how much would be the gas prices in various locations, how much food you may need to buy, etc. But, you can guess that most probably the cost will be close to 300$. The probability of the cost 500$ or 100$ is relatively low. Therefore, a normal distribution with a mean of 300$ can suit this scenario, right? Let's click the probability button from the payoff editor, and chose "Normal Distribution" this time.

Once you select the normal distribution, you can specify the mean and standard deviation. 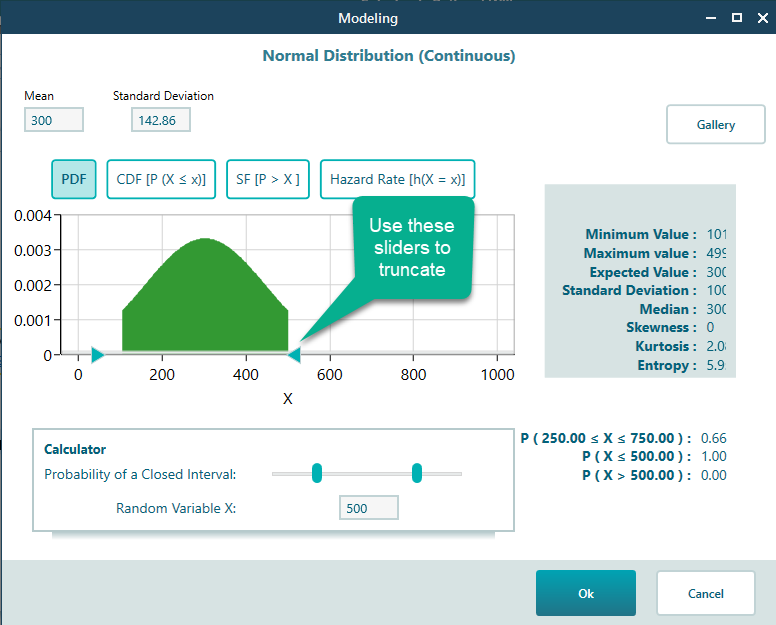 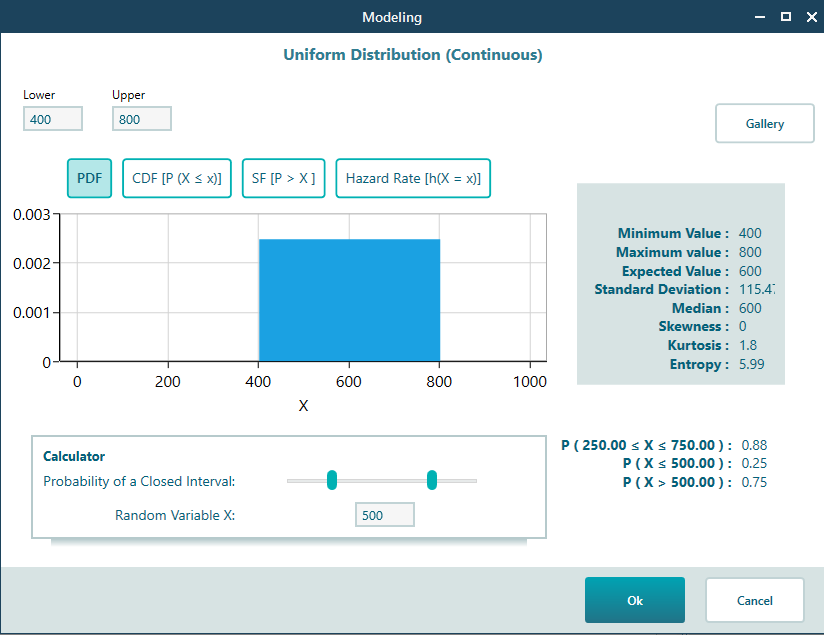 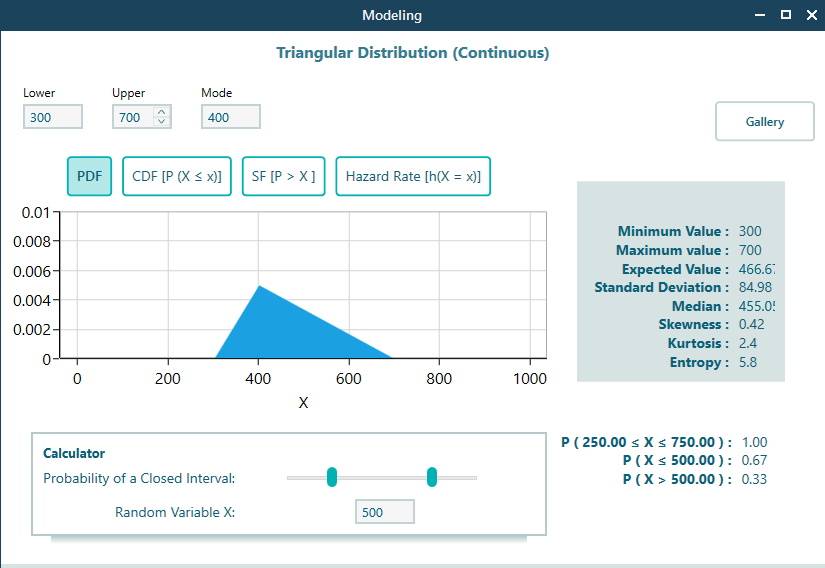 So, finally, the decision tree will look like this. 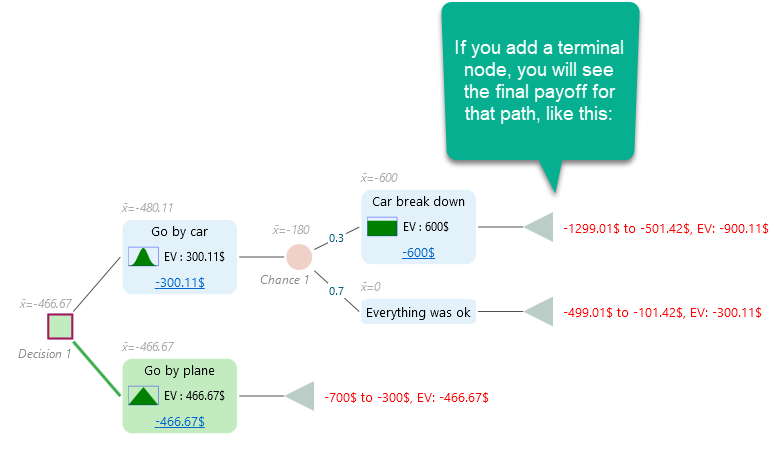 Ok, you have completed the modeling. Now, you can expand the Options analyzer panel to see all the calculated results. And guess what, the Monte Carlo Simulation is already performed for you. Just notice the probability distribution shown in the risk profile panel at the options analyzer, this probability distribution is the result of Monte Carlo Simulation.

Notice that, the probability distribution curve in the risk profile panel is not very smooth, because, by default, 500 random samples were used for the Monte Carlo simulation. You can change that to 10,000 to get a better result.

You can resize panels to get a better view of the results. As shown below. (Notice that, Stochastic Dominance is also calculated from the risk profile).

Explanation of the Result

Ok, the SpiceLogic Rational Will or Decision Tree Software has generated the Probability Distribution (In the Risk Profile panel). But How? The software, created thousands of random sample as follows:

So, in the first round, the total cost is calculated as "p + q".

2. The same process continued for thousands of times and a lot of outcomes were calculated. The software decides to show 100 groups of data. Therefore, it creates a group interval for the total outcome such that, there will be a maximum of 100 groups. As you can see from the above screenshot, where the tooltip shows the group "-932.36 to -920.36" is a group of the outcome, and the probability of that group is 0.01.

By default, the Monte Carlo Simulation option is turned on for any scenario when a Probability Distribution is used.

If you set the option to "Always Instantly", then no matter if Probability Distribution is used or not, if there is at least a chance node in a decision tree, Monte Carlo simulation will be used to generate the Risk Profile.