Are you afraid of event handlers because of C# memory leak? Fear not!

But, do you need to be feared about it? And do you always need to detach the event handler like:

The answer is, No, I mean, not always. But, please note. I did not say 'Never.' I said, 'Not always.' That means, yes, you should also know when you need to worry about event handlers and associated memory leaks. Okay, how to determine when not to worry and when to worry?

That's the place things get confusing for many new developers. So, I thought, Enough is Enough. We need to come up with some clear understanding of this fuss and develop an easy rule of thumbs that we can always remember when coding. The basic idea is straightforward and easy to understand. The confusion comes from a C# += syntax of the event handler, and that's what I will explain.

Something basic about references.

Say, someone has come to your room to clean. He is picking up all unnecessary items and throwing in the garbage. 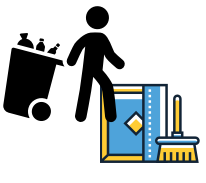 How will he determine if something is garbage or not? Say, he found a piece of paper on the ground. He must ask you if you need that paper, right? If you do not need that, then he can throw that to the garbage bin. The paper is found on the carpet. The paper needs the carpet to stay on. You need the carpet for sure. Does it mean, the paper cannot be thrown to the garbage bin because the paper needs the carpet and carpet is not garbage? No. that will be an absurd logic, right?

So, what have we learned? We learned that it does not matter if an unnecessary thing needs anything important when determining if the thing should be thrown into the garbage bin. What matters is that, if the thing itself is needed by something important.

The same example can be applied to the .NET Garbage collector. Think about two classes, A and B, where A keeps a reference of B, as shown here. 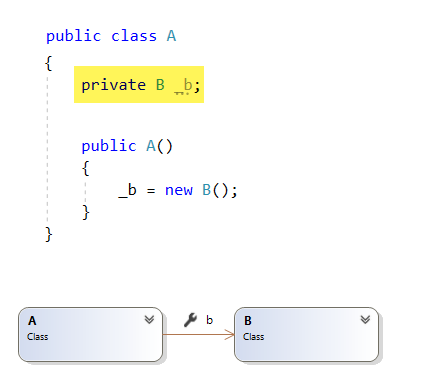 What happens with the Event Handler?

Let's get back to our class example. So far, so good. Say, now, class A does not need anything from class B. So, there is no reference of class B in class A. According to our analogy of carpet, paper, and you, where you represent the object of A, the paper represents the object of B, this time; you are not claiming that the paper is important to you. So the garbage collector should be able to pick up that paper and throw it to the garbage bin. Right?

This time, class A is featured with an event named "SomethingHappened."

And class B subscribes to that event, as shown here. 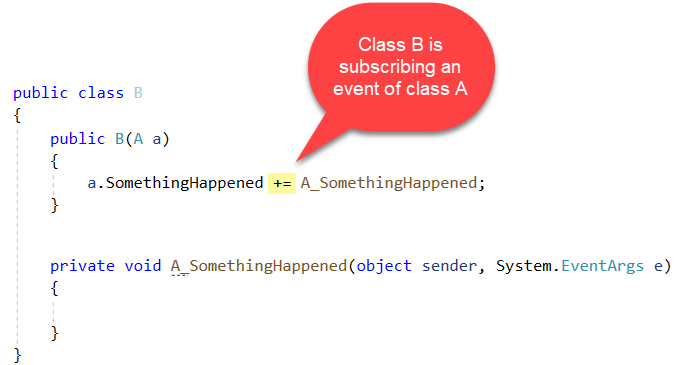 Well, surprise! The Garbage collector cannot collect the object of B.

Now, is the sweating time...uhh... why? I mean, why not? Why doesn't; the Garbage Collector collects the object of B?

Now, say that your application has finished all necessary works with an object of B and now. So, what do you expect? The object of B should be collected by GC, right? GC finds that object B is listening to an event of class A. Then, it checks if the object of A referenced by class B is live in memory. If so, then, it cannot collect the object B. So, in .NET terms, a memory leak occurs.

But, as a developer, what have you done wrong so that the .NET Garbage Collector cannot collect the object of B even though no other objects needed the object b?

So, the C# syntax += means, that, the right side thing injects a reference of itself to the left side thing. 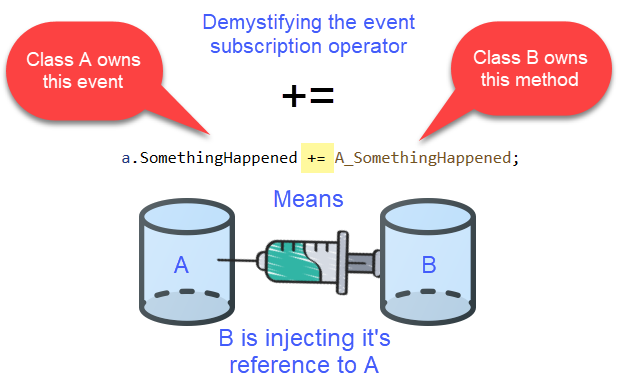 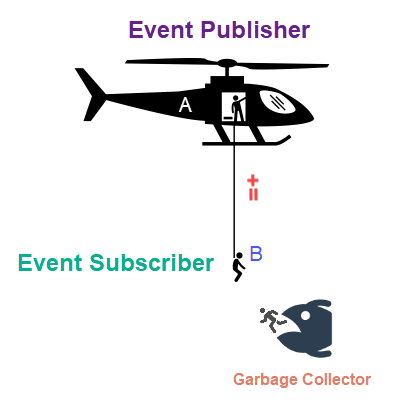 From the theory of Evolution, many of us might be familiar with the famous statement "Survival of the fittest." Here, in the .NET world, we see "Survival of the Event Listener.". Who listens, he/she survives.

So, when not to worry!

In other words, when do I need to make sure that the event handler detachment is done? Say, object A and object B, both are expected to be living in the memory at the same time or almost the same duration. For example, Window control in WPF creates a Button control. The Button's Click event is subscribed by the window.

In WPF or UWP or Xamarin Form, typically, a button is created in XAML, and the Click event handler is created from the XAML, as shown below.

Now, you understand that we do not need to worry about such event handlers.

And, when to worry?

Parent to child communication events.
(Publisher of the event outlives the subscriber)

In the ChildWindow class, you subscribe to the event.

If you show the child window, say 50 times, you will have 50 instances of the ChildWindow object living in your memory, and that can be a big problem. In fact, you can hit the MemoryOverflowException.

You can detach the event handler at the Unloaded event of the ChildWindow. Like this: 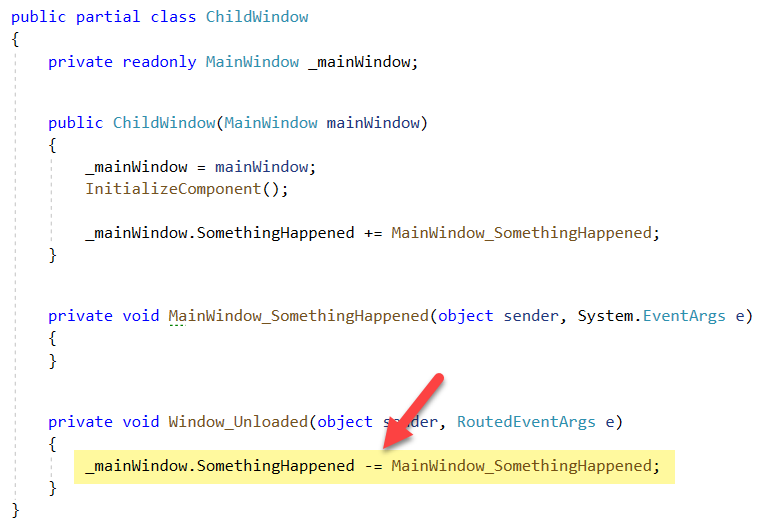 In order to prove the idea, I have performed memory profiling using the Jet Brain Dot Memory profiler. I ran the Main Window, which shows up like this.

Then, I have taken a snapshot of the memory. I clicked the "Say Hello" button 3 times, where the click event handler of this button shows 3 Child Window. Then, I have closed all those 3 child windows and flicked the Force GC button to force the garbage collector to execute all cleanup.

Then, I have taken another snapshot of the memory. I have compared the 2 snapshots and discovered that my idea was correct. As I have clicked the button 3 times, 3 ChildWindow was created, and even after closing those child windows, and even after force running GC, 3 objects of ChildWindow was still living in the memory, as shown in the following screenshot taken from the JetBrains dotMemory profiler.

Not only that, but the dotMemory profiler also gives a nice analysis view of a snapshot where an event handler leak section is especially demonstrated. In that section, we can clearly see that, because of the 3 button clicks, the 3 Child Window which was never collected, caused a memory leak. 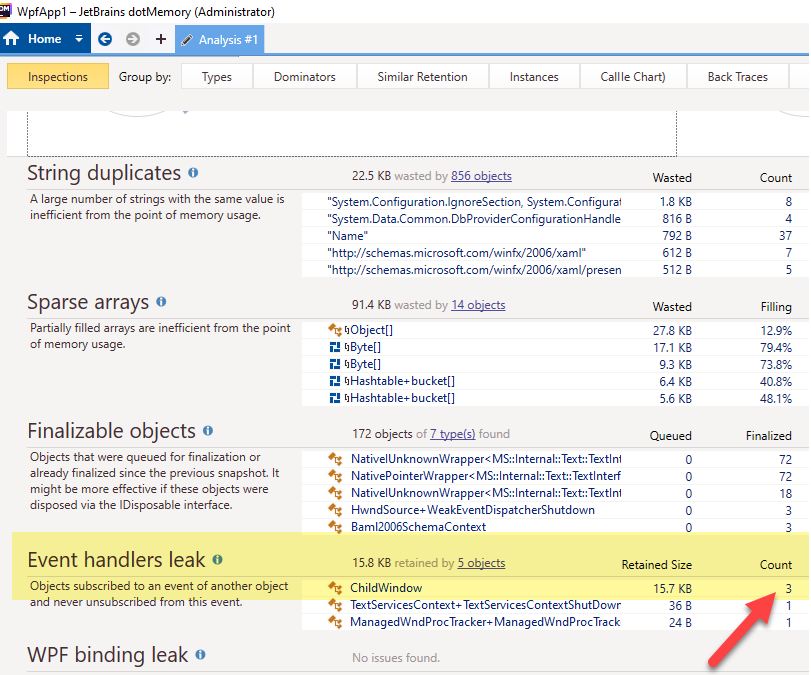 After this analysis, I have detached the event handler in the Unloaded event of the child window.

Then performed the same steps. Ran the Main Window and clicked the button 3 times and taken memory snapshot. Then compared the snapshot. Wow, I did not see the leaking 3 ChildWindow objects like the last time. The Event Handlers leak section of the Snapshot analysis window shows no ChildWindow object like before. 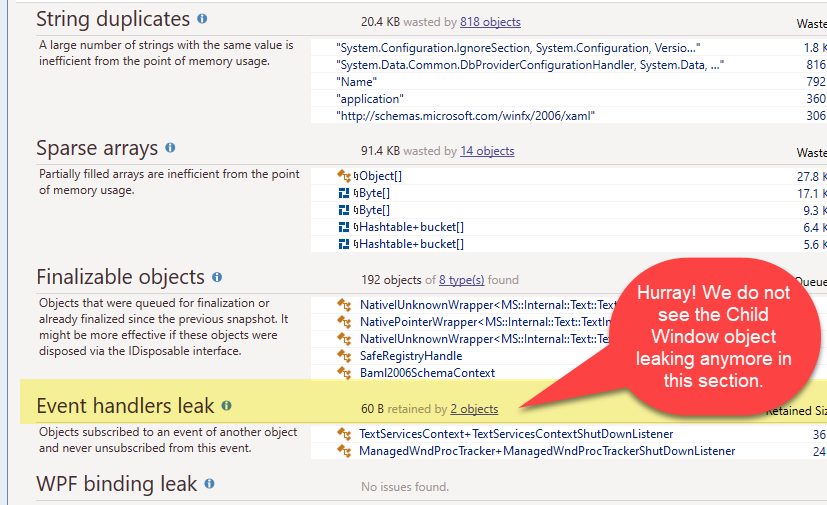 Then, be wary!! A static event will make your subscribing object living forever in the memory. So, you must detach the event handler of the static event, if your subscriber object is supposed to be destroyed before the lifetime of the application.

Many times, a WPF Window, or Page or User Control subscribes to an event of a ViewModel. And also a ViewModel is highly likely to be living way longer than a view. In such cases, if your view subscribes to an event of a ViewModel, then, be very careful and remember to unsubscribe the event as soon as possible. In many source base, a view is removed from the layout dynamically, from code behind. In those cases, if the event handlers are not unsubscribed, the views will stay in memory. A View is usually highly memory hungry. So, your application will suffer performance, 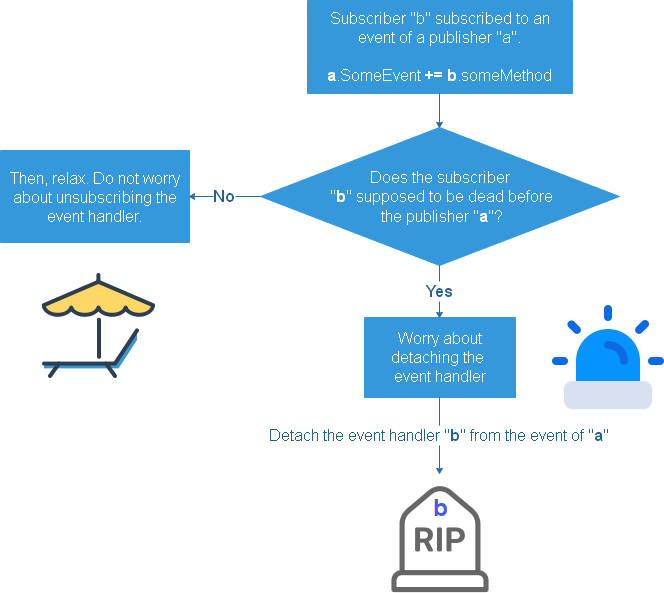 Last Modified at Jan 7, 2021
© All content, photographs, graphs and images in this article are copyright protected by SpiceLogic Inc. and may not, without prior written authorization, in whole or in part, be copied, altered, reproduced or published without exclusive permission of its owner. Unauthorized use is prohibited.